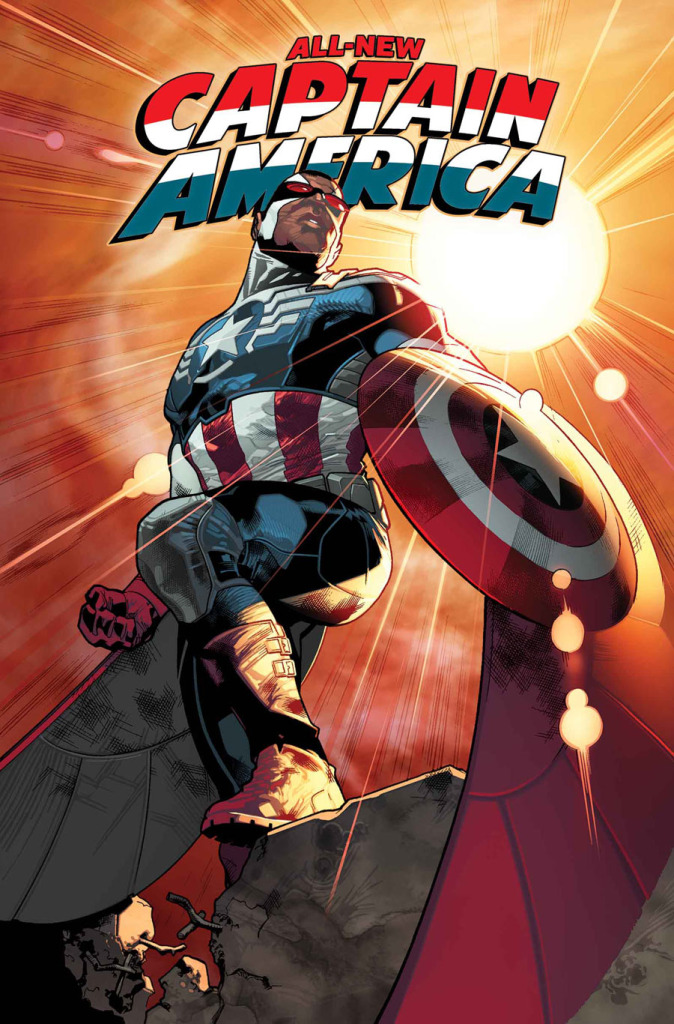 Rick Remender and Stuart Immonem bring us a new era of Captain America’s history in All-New Captain America #1.  Due to his extreme age, Steve Rogers has been forced to give up the shield and now a new inspiring Captain America defends freedom. It is truly an Avengers NOW! world as Sam Wilson pulls on the red, white and blue.

Captain America goes on his first mission attacking a Hydra base.  As Sam Wilson learns how to use his shield he teams up with old allies (Redwing) and new ones against a traditional Captain America foe.  Fighty Fighty breaks out as Batroc has joined the forces of Hydra.  And Batroc wonders why has a sidekick been sent to challenge him instead of the classic Cap.  As the issue closes the reader wonders if Wilson and his allies will escape alive!

Level Seven Analysis
Sam Wilson is Captain America and it appears he is loving it.  He wonders about why he did not get a shield earlier.  And one feels like this is classic Sam Wilson, despite the uniform change, as he teams up with Redwing and adds wings to the Cap costume.  This really is Captain Falcon.  And unlike the often stoic Steve Rodgers, Wilson enjoys being Cap and his attitude is infectious.   This Captain America lifts the spirit and really is an inspiring symbol of freedom.

But where is Steve Rogers.  He is hanging out with his much younger girlfriend and trying to give direction to his former partner and now replacement of course.  You do get the sense that Rogers is having trouble letting go of the shield he can no longer carry.  And you do wonder if he would have found the transition easier if Bucky Barnes could have taken up the shield, since Bucky can be stoic and is of the same generation.  There is another candidate for the shield discussed in Nomad.  But you get the sense that the Nomad replacement would have further put Rogers on edge.

There are some nice little nods to other stories in this adventure.  First, Batroc is the main opponent and he is less silly than I have seen him in other stories.  Typically Batroc in the stories I have read is a joke.  Really, it feels like a nod to Captain America: The Winter Soldier with a more formidable version of the villain.  The second nod is a Hydra agent named Bob.  Every Deadpool fan will immediately Google to determine if this minion is in fact Hydra Bob.  He is not!

I found All-New Captain America #1 an enjoyable action packed issue.  And you can expect future comic files as trades come out.  But Sam Wilson is being spread into several titles in his new role.  And I do not read Captain America weeks monthly.  This issue did not change my small pull list and I have no plans to add three Captain America titles.  So I do not anticipate I will consider reading the title on a regular basis.  But I do look forward to reading those full story arcs and hope to enjoy them as much as some of Remender’s past arcs.