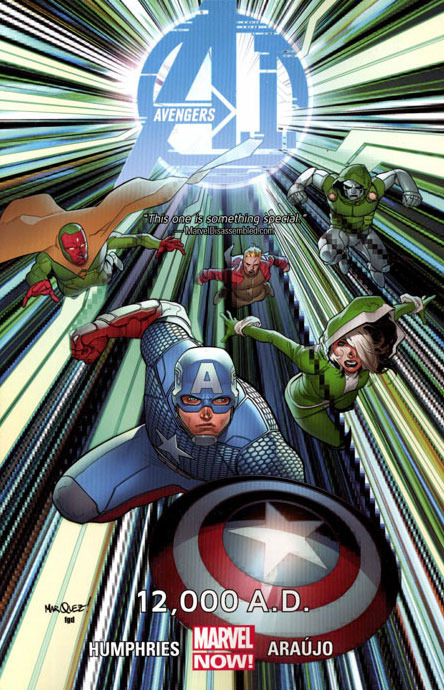 Sam Humphries’ Avengers A.I. gave us a different kind of Avengers team, one lead by a human and composed of artificial intelligences.   Avengers A.I.: 12,000 A.D. brings this short lived title to an end.  But the creative crew is able to give the team one last run against their greatest artificial nemesis, which is only trying to erase the entire history of mankind.

Artificial Intelligence makes humans nervous.  And we can all understand after Dimitrios attack on humanity.  The United States government has passed Doctrine 47 which allows artificial intelligence to be treated as property and turned off even if sentient.  And as the power of the Diamond spreads across the world, even Captain America can see that the extinction of humanity is Dimitrios’ goal.  As Dimitrios launches another attack on humanity, Hank Pym leads the Avengers A.I. team and Avengers’ volunteers into the Diamond to support a rebellion within Dimitrios, a villain who thinks on a whole different level.  If the team fails, humanity could cease to exist leading to the year 12,000 A.D. where the Avengers Empire is the only defense against Dimitrios’ plan to erase all of mankind’s history.

Level Seven Analysis
Can the Avengers handle the Diamond?  Now usually I am not a big fan of Hank Pym.  But you have to give him a high five for standing up for himself and the team.  Can they handle it, his response, “We took down a god on our first day!”  For Pym’s money there is no problem that the Avengers cannot handle.  He also has to stand up for himself.  His artificial grandson Victor is giddy over the fact that he is fighting beside Captain America.  Pym reminds us he was an Avenger longer, by a few days, and was there when Cap was defrosted.  Despite that fact that Pym is not my favorite superhero you do have to admit he has some serious cred.

“Doom does not wear “hoodies.”  Doom wears cowls!”  Doombot is really the break out hero, or anti-hero, of this volume.  He has a key and emotional role in the Inhumanity tie in issue.  And you can see some serious emotion growth in the artificial Doom, while he still retains his Doomness.  As I think about it he was a key role in the entire volume as his relationship with Victor grows.  I really would love a buddy story or two of Doombot, and his sour attitude, and Victor, with his optimism.  It is the new Odd Couple!

Monica Chang, who I was excited about seeing in the Marvel 616, is kind of put to the side.  She teams up with Jacosta to track down and turn off rouge A.I..  Their primary target is a Life Model Decoy who appears to have assisted the Diamond.  While the LMD has a bigger role in Dimitrios’ plan, it does really feel like Chang is a back-up story to Pym’s stardom.  And you have to wonder if Chang will get sent to Alaska instead of making it into a new title.

Goodbye Avengers A.I.!  Goodbye Doombot and your quest to escape inferior beings.  Goodbye Victor, you made Grandpa Pym proud.  Goodbye Agent Chang, get back to the Ultimate Universe where your much more capable self leads S.H.I.E.L.D..

Yes, this is the conclusion of Avengers A.I..  I will admit I think more could be done with the Diamond and the entities that live in it.  And I would like to see if they use Marvel 616 Agent Chang again.  But all of this will be done in other titles, though I prefer the Ultimate version.

As a series, Avengers A.I. exceeded expectations for me, though it is not my favorite Avengers title.  I do not really like Hank Pym as a main character.  But Doombot and Victor need their day in the sun and I hope they can find a way to break out onto the page somewhere else in the future.