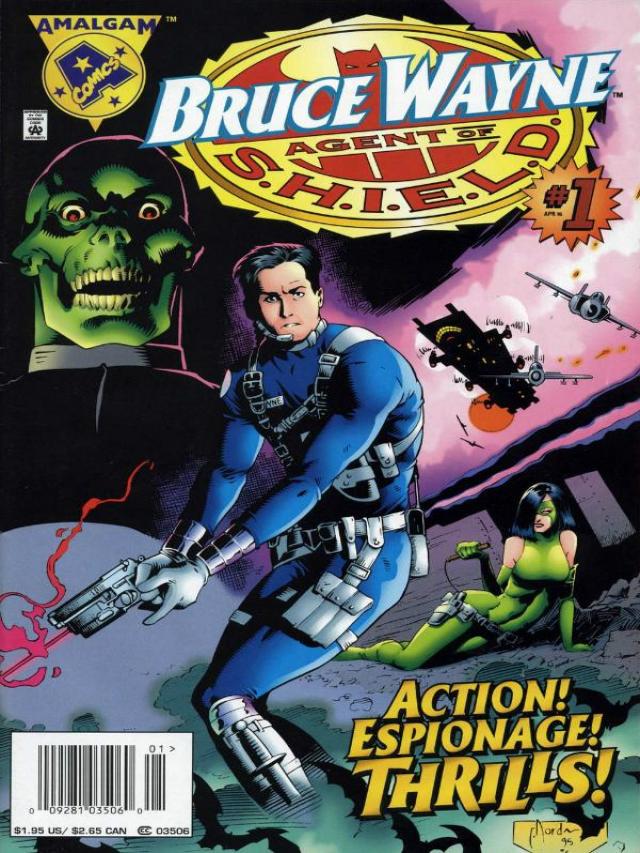 The Amalgam Universe is where peanut butter and chocolate unite in the comic world. It is a collaborative effort between Marvel Comics and DC to combine their universes in the late 1990s for a set of one off stories, which the publishers wrote as if they were deeply established and would continue to run for years. One of those issues grabbed the attention of Level Seven agents, Bruce Wayne Agent of S.H.I.E.L.D.. With the issue combining Batman and S.H.I.E.L.D. what could possible go wrong?

Colonel Bruce Wayne is Nick Fury’s protégé, S.H.I.E.L.D.’s greatest agent and incredibly focused on one task, taking down Lord Green Skull of HYDRA who killed his secret agent parents. Wayne has used his vast fortune to make S.H.I.E.L.D. his personal army to find and destroy HYDRA. But Lord Green Skull has other opponents, including his own daughter, Selina Luthor. The hatred triangle explodes as Lord Green Skull starts the Planetsmasher using the Terra Cannon to destroy the earth and ensure that if he cannot win the day, no one will. The volume ends in a cliffhanger as the Terra Cannon fires.

Bruce Wayne, as one would expect, is S.H.I.E.L.D.’s greatest agent. And much of this is due to his focus on revenge. With his parents killed by Alexander Luthor, Wayne puts everything he is and has into bringing to justice their murderer. Fury worries about his right hand, he worries that his anger will get the best of him and lead him to make rash decisions that will lead to his untimely death. Really, this is the Bruce Wayne that we know and love from DC, he is just sans cowl and working under the banner of S.H.I.E.L.D.. Fury does make it clear that Wayne is using S.H.I.E.L.D. for his own agenda, which makes this version of Wayne still a self directed man instead of working for the man.

Wayne surrounds himself with loyal associates, many of who will seem familiar. Dick Grayson is sidekick Moonwing. However, it is clear that this Grayson is not the first Moonwing, and the former hero that carried that moniker is not pleased with his replacement. Also present is Barbara Gordon Hardy or Black Bat. Hardy and Wayne have a very close relationship and are closer in age than the traditional Batman and Batgirl. It also gets confusing as it seems at least once Wayne refers to her as Huntress, another character within the Amalgam universe. These two Batman staples are not the only crossover characters. Nick Fury’s closest friend in the issue is not Dum Dum Dugan, but another World War II solider DC’s Sergeant Rock. I will say I love this casting and think it is great the Marvel and DC creators pushed these two World War II soldiers together.

I sadly have discovered that I am not a fan of the Amalgam universe. I love the idea of Marvel and DC combined, but the follow through on the hand full of books I have read has been lacking for me. Many of the books feel like attempts to jam in as many Easter Eggs, puns and characters as possible but are light on story. I do understand story can be difficult since all of these are stand alone issues that appear to be part of a non-existent comic line and to be continued in a non-existent next issue. But still I wish Amalgam had pushed fewer tie-ins. But I will say for what I have read Bruce Wayne Agent of S.H.I.E.L.D. probably works the best for me. I am keeping this issue, where I will not be keeping others. Part of the comfort level may be that this Bruce Wayne is personality wise very much in line with the DC version of Wayne. And as a reader I feel like I can carry my DC baggage into the story. This seems true since this volume was written by Chuck Dixon who was a very prolific Batman writer in the 90s. In short I may be comfortable with this Wayne since Dixon is comfortable writing the character and was not a random author assigned to a gimmicky book.

Peanut Butter Cups are really good. But I do not love the Amalgam universe. Bruce Wayne Agent of S.H.I.E.L.D. #1 is the clubhouse leader out of all the issues I have read. If you are a Batman fan or a S.H.I.E.L.D. completist you will probably enjoy this issue too. But if you are looking for a full story arc, look elsewhere as this stunt story will never be completed.