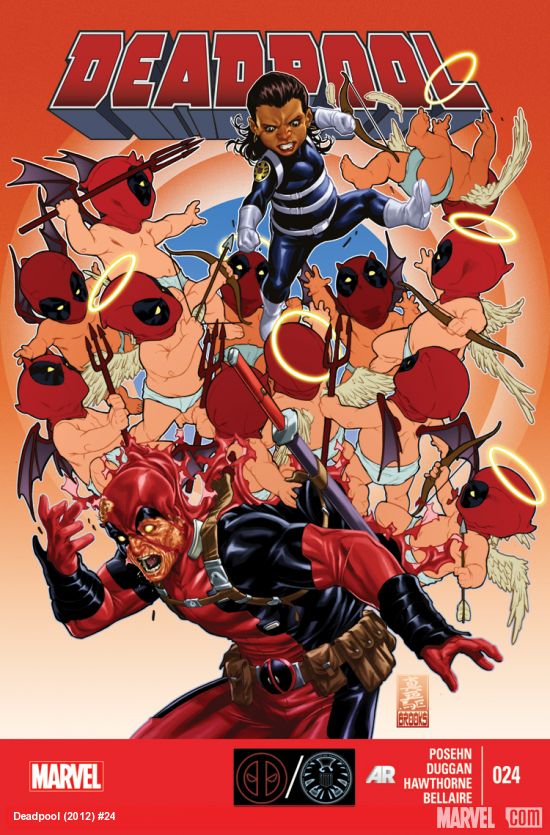 I'm sad to say it has been super negative over here at the Level Seven Hub lately.  Seriously, it seems like Marvel has just been doing us…wrong!  As someone who loves Marvel and S.H.I.E.L.D. I am dedicating myself to only find happy things in Deadpool #24

Yep, this is one great story.  It is typical Deadpool with the comedy and the fun and the violence without an icky cover!  I liked it.  Sure some negative Nelly's (I apologize to any readers named Nelly) would look at this story and say, hey give me more Coulson and Adsit since they did not really do much.  But honestly, they are window dressing to the odd couple of Preston and Deadpool!  I am sure next issue Coulson will be on the case, or as hinted in this issue filling out paperwork!

I know Agent Ben would not believe this, but this really is a deep character issue.  Agent Preston has been in Deadpool's brain for a longtime.  And she honestly has some serious insight into him.  In my opinion, she was with him at one of his lowest moments ever, and that is saying something.  She really is a nice person and she worries that without her that Deadpool may be alone!  Preston wonders if alone is somewhere he should even be, you know considering the destructive behavior and all.  And as you listen to Preston's concerns as a reader you wonder if losing Preston is really a great idea for Deadpool and does he even want her to go.

Preston has S.H.I.E.L.D. problems.  I mean sure she died and all, but S.H.I.E.L.D. works fast.  And even if you call in and report that you are stuck inside the mouth of a Merc with a Mouth there is no guarantee you keep your stuff.

Hey, Necromancer Michael and the ghost of Benjamin Franklin are back.  Honestly, one of my favorite moments involves old Ben fighting to protect Deadpool's mind!  It left me with the sort of image that would make Winston Churchill proud!

Yep, this story was all unicorns and rainbows for me.  Well, actually it was smelly wizards and ghostly founding fathers!  It was a nice break from being negative reporting something that was funnish (is that a word).  Now, we just need to see Deadpool get his dirty dirty Monies!