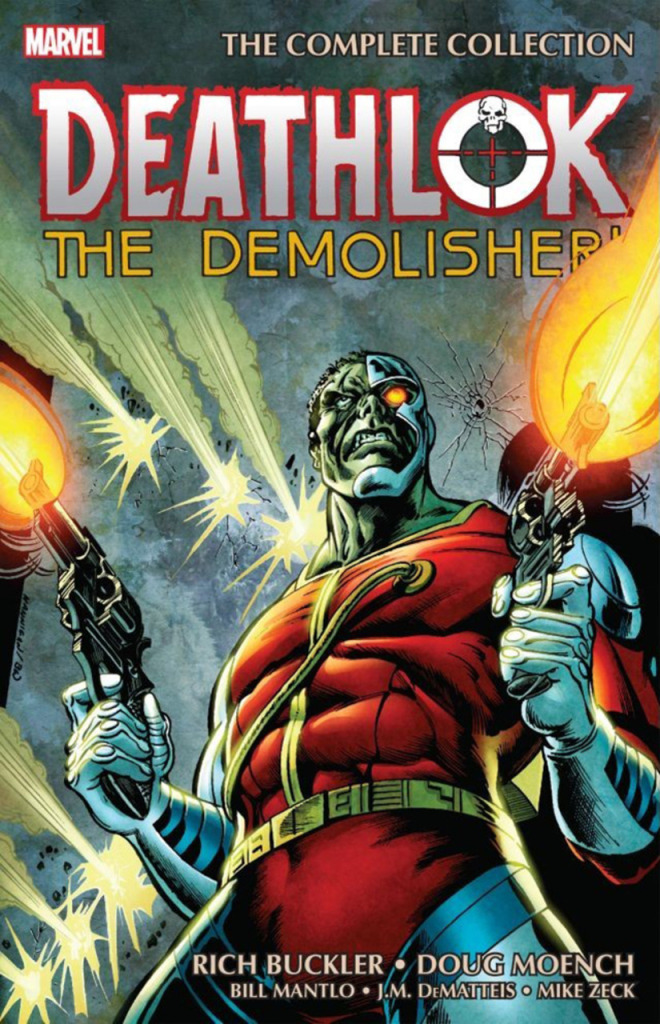 Preamble
If any Marvel character got increased visibility from Agents of S.H.I.E.L.D. Season One, it has to be Deathlok.  Mike Peterson and his quest to become a hero and instead being transformed into something more closely aligned with the Frankenstein monster was a compelling story for those not familiar with this Marvel cyborg.  But do the roots of Deathlok in Deathlok the Demolisher: The Complete Collection make an equally interesting tale?

Situation Report
Colonel Luther Manning, one of the world’s greatest military strategists, will die on a future battlefield.  But his death was just the beginning as Project Alpha-Mech lead by Major Ryker resurrects Manning as a military cyborg, Deathlok.  Manning faces numerous personal and military challenges as he struggles with his duel nature as man and machine, his fate as a Frankenstein monster and a world ruled by Ryker through his cyborg soldiers.  Deathlok will spend one evening fighting through New York attempting to save his shattered world from the clutches of evil.  After a key face-off with Ryker, Deathlok is lost in the time stream, emerging in Marvel 616.  Deathlok struggles to get back to his timeline and future of 1991 while he navigates a world that sees him as a monster.  Can Manning get home and if he does, will his world continued to be ruled by Ryker and other evil cyborgs.

Level Seven Analysis
I had never read these stories.  And will admit I was skeptical but I found myself very entertained.  Deathlok’s creator Rich Buckler wrote, drew or plotted much of his origin story in Astonishing Tales, which includes Manning’s first struggle against Ryker.  While I did not realize originally that the story was set in the future, because it is set in my past.  Eventually I was able to see this story as a very interesting and action-packed post-apocalyptic tale set in an undefined future.  And despite the action the story is very much based on Manning/Deathlok’s struggle with his new state as a cyborg with a horrible looking face that not even his wife can recognize.  The volume contains 23 issues of comics from 1974 to 1982, and along with Buckler creators include Doug Moench, Bill Mantlo, Marv Wolfman, John Byrne, Sal Buscema, Michael Golden and more.  Honestly, I should have never been skeptical with credentials like these.

The material beyond the origin story is really fun.  Spider-Man visits Deathlok’s world.  And he discovers that the morals of the future have changed.  Oh and no one has ever heard of Spider-Man!  This story helps establish that Deathlok’s future is not the Marvel mainline universe.  In our time, Luthor Manning and Deathlok team-up with Captain America to stop a plot to eliminate all heroes.  In a world without heroes, it is easier for evil to take over, with cyborgs of course.  And Nick Fury gets involved at one point, trying to work with minds like Reed Richards and Tony Stark to free the cyborg from villainous mind-control.

What can the Marvel Cinematic Universe learn about Deathlok from the early comics.  First, Deathlok has a compelling struggle.  A Deathlok does not look human.  And is at times not considered human by both humanity and himself.  And I think J. August Richards could dramatically convey this feeling.  The story of Deathlok really is a Frankenstein tale.  Second, most people assume that Deathlok is bad!  This can lead to plenty of misunderstandings as Mike Peterson comes to town trying to help out the good people.  And I would say, finally some elements of Deathlok should not be MCUed.  I am not sure we want to see a cyborg talking between his human voice and his computer voice.  It works on the printed page but I am not sure I want to see it handled on the screen.  Oh and finally, alternate timelines are interesting.  Can anyone say X-Men: Days of Future Past?

I thought I would not like it.  But I really did enjoy the nostalgia of Deathlok the Demolisher: The Complete Collection.  And best of all I found stories that were still relevant, interesting, and provide interesting concepts for MCU creators.