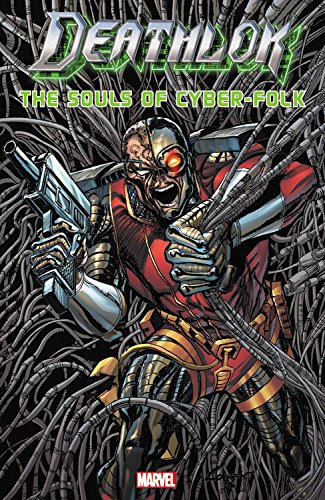 Former Roxxon employee Michael Collins has problems.  His former employers have stuck his mind, though not his brain, into Deathlok.  Michael wonders if he can hold to his moral compass and humanity inside of a cyborg killing machine!

Michael Collins trapped in the Deathlok body navigates his new normal while trying to hold to his pacifist values.  He finds himself challenging Warwolf, saving other cyborgs from Mechadoom, taking on Ghost Rider and working for S.H.I.E.L.D..  The whole time he faces these challenges his computer continually asks for permission to kill.  Along with his physical confrontations this version of Deathlok is challenged by the meaning of family as a father and husband in a body not his own.  How can a cyborg keep his son from falling into the wrong crowd while keeping him out of the Punisher’s sites?  And an original Deathlok attacks his family, including his unborn child, in order to reclaim his identity.

Thanks to Agents of S.H.I.E.L.D. we have seen a family focused Deathlok before.  I assume when Michael Collins made his debut in the 1990’s a family man cyborg was something fresh and new.  But today with multi-dimensional and deep characters in the Marvel Cinematic Universe it seems less fresh after the passage of time.

Something else that was also new in the 1990s was the internet.  And Deathlok goes totally Tron at moments as he enters the grid and fights other computer enhanced entities.  It is definitely a new place to take Deathlok, especially when you consider the fact that Michael Collins and his computer are really two different people.  Wait, now I am totally beginning to question how Michael could enter the grid.

The majority of the art is by Denys Cowan.  And I will admit I am not always a fan.  Some poses look really odd.  And this collection features one of the ugliest babies ever (and I’ve seen ugly babies).  But the art sometimes strikes me as odd.

A big question in this book is the humanity of Michael Collins.  Is he a man or a machine?  Does he have a soul?  I would argue he does since he seems to maintain his personality and beliefs, not protocols.  The real big indicator that Michael is Michael is his unwillingness to kill.  The computer fights him constantly on this matter because to be blunt killing would be more efficient at times.  But the fact that Michael can review his beliefs and review them in somewhat emotional ways helps me come to my conclusion that Deathlok has a soul.

Another big theme is fathers and sons.  Michael struggles with how he can be a good father while being bound to a body not his, and looks like a monster.  How can one make sure your son is in the right crowd?  This theme is also found in two S.H.I.E.L.D. agents.  The Angstroms are caught up in the Deathlok drama.  And there are consequences which lead to bad decisions cause by familial connections.

S.H.I.E.LD. has a decent insurance program!  And as a murdering cyborg with kid number two on the way, well you need to be insured!  But as Michael knows, a favor from Nick Fury has a price.

I did not find Dwayne McDuffie and Gregory Wright’s Deathlok: The Souls of Cyber-Folk to be a version of Deathlok I really enjoyed.  Perhaps I wanted more Frankenstein and less Plato.  Or perhaps this is a volume that did not age as well as even the earlier Deathlok stories.