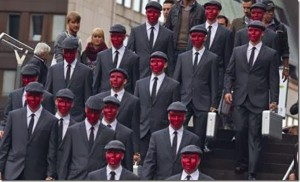 Remember when they released those red faced guys in promo pictures?

Remember when we thought they were going to be something related to the Red Skull? Or Rising Tide? Or something really evil and menacing?

Remember when we were trying to figure out who NO ONE in the crowd was even reacting to a bunch of men in red masks carrying briefcases on to a subway?

Remember how confusing it was when they were all beat up before the title came up?

The episode did not go as expected, but that's not a bad thing, is it?

So, again, ground work is being laid. Character relationships are being built. Skye calls Coulson A.C. for the first time. How many times will they tell us psychic abilities can't exist? And we get more hints that Coulson is different since he died, and we also get some insight into his past as a S.H.I.E.L.D. agent. And then there's the alien writing, something that we'll be dealing with in season 2, it seems.

But the focus on this episode is Amador. She has the eye bomb, something with threads that go through the whole season.

Her story includes threads of Hydra, too! She was being held prisoner, S.H.I.E.L.D. heard rumors of where she was, but when someone came to rescue her she thought it was S.H.I.E.L.D. and it was…someone else. Someone organized. The implication: Hydra, from the inside, found out about her and got her before S.H.I.E.L.D. could. A minor detail, but a nice one.

“Eye-Spy” was a highlight of the early season as I remember it, and watching it now was just as fun. Captain America: The Winter Soldier changed everything, though. Now we're not looking at Ward making friends, we're looking at Ward playing a role.

What about you? What do you remember thinking about this episode wen it came out, with its focus on espionage and mysterious hints at the bigger story? Does it work for you now?

Next episode: The Girl in the Flower Dress