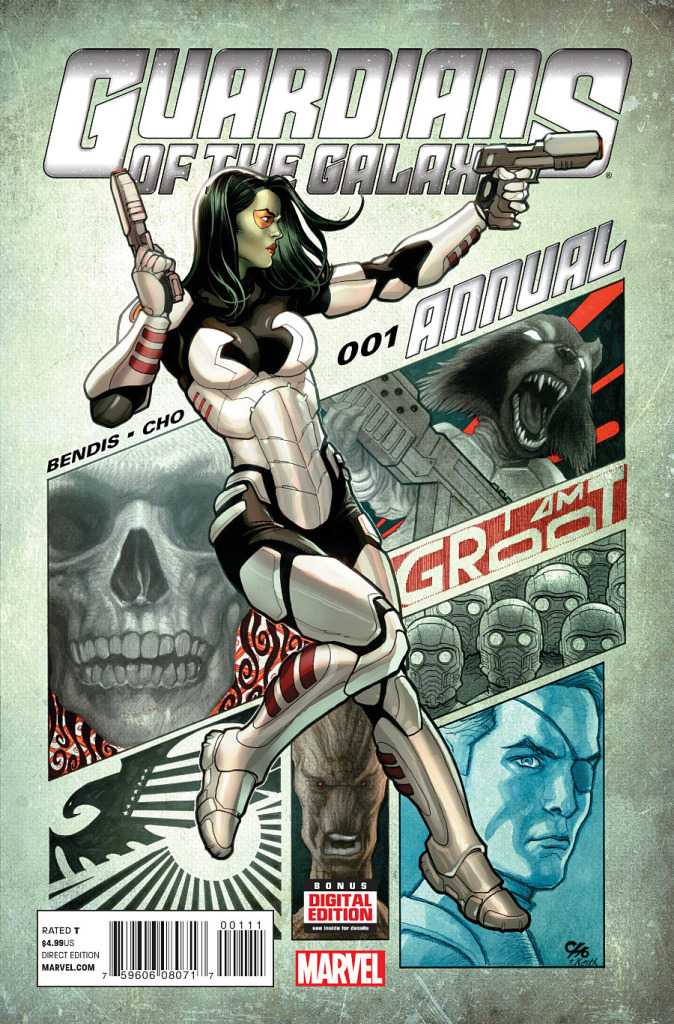 Man, it has been nothing but tense lately. We found out some shocking secrets about Nick Fury in Original Sin. And I cannot even discuss the distrubing turns on Tuesday nights that we were hit with (because it is possible that some agents do not know yet about that thing with that person). So can we just have some fun already…hey the Guardians of the Galaxy are fun! Why don’t we give Guardians of the Galaxy Annual #1 a spin.

Captain Marvel has joined the Guardians of the Galaxy (I wonder when that happened)? And as she reflects on her current cosmic team-up a S.H.I.E.L.D. hellicarrier shows up in space, an old one. A young Nick Fury is commanding this space faring S.H.I.E.L.D. technology. The Guardians of the Galaxy find that the entire ship is crewed by a team of familiar looking S.H.I.E.L.D. agents. The hellicarrier has been out there (you know in space) for a while with a mission to stop another Kree-Skrull war. Nick Fury wants to kill all the Skrulls he can. And Skrulls he finds, with the Guardians and S.H.I.E.L.D. joining forces to take on fugitive Skrulls, tired from running from S.H.I.E.L.D., in a massive fighty fighty.

What! Seriously! Nick Fury is looking young and that is not the final fate he finds in Original Sin. And Dum Dum Dugan is looking really trim! And Jessica Drew does not even seem to understand that she is a Secret Avenger or good friends with Carol Danvers. Now, perceptive agents can assume that something is going on here…and it is. I will admit the answer could be seen as a cliché or if you are like me you may just really like it when you get the big reveal that confirms all of your guesses.

Hmmm, no Agent Coulson or Agent Koening? What is that about? I guess Coulson I get because this hellicarrier has been on its mission longer than Captain Kirk’s five-year mission. But I really would have loved to see for us Agents them place Koening on this team. Maybe he is in Engineering making lanyards!

There is some character development going on. And it is a question of Captain Marvel and what is she doing in space? Should she be back home on Earth serving as an Avenger? Carol struggles with this question throughout the issue. I think she comes to a good place by the end of the issue that can help her progress, or not progress, as a member of the team.

This story by Brian Michael Bendis with art by Frank Cho is a really fun and interesting story. It is fun to see a spaceship staffed by classic S.H.I.E.L.D. jumpsuits. It is like Star Trek with Nick Fury in the big chair, seriously Agent Ben needs to be reading this! Actually I would add a book about this S.H.I.E.L.D. crew in space to my pull list. It is action, adventure, and the triple threat of a little humor.

Man, this story has heat! And I am not talking about the sparks of anger between Rocket and Fury. And I am not talking about the lack of sparks between Rocket and Captain Marvel, come on how can you not be interested in a talking raccoon? In the end Guardians of the Galaxy Annual #1 is the type of book I want to be reading and would love to see this special one-shot turn into some future takes of S.H.I.E.L.D. in spaceeeeeee.