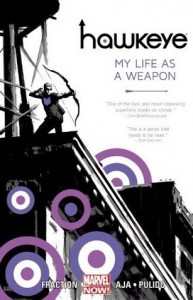 I have heard so many good things about the Marvel NOW Hawkeye series that I have anxiously been anticipating the collected trade, Hawkeye: My Life as a Weapon. I have heard it is both gritty and cool, which sounds intriguing since my Hawkeye is still primarily wearing purple with a giant H on his head. Would this Hawkeye hanker back to the West Coast Avengers or remind me of Jeremy Renner and the MCU?

In Hawkeye: My Life as a Weapon, the reader follows Hawkeye through several distinct storylines instead of one unified arc. In the first story, Hawkeye battles Russian mobsters on behalf of his neighbors. In the second, Hawkeye and his protégé Kate Bishop face off against a criminal circus, which is stealing from criminals. In the third, Hawkeye organizes his trick arrows while protecting a woman he has just meet from “Track Suit Vampires” with Bishop’s aid. In the fourth, Barton attempts to reclaim a video tape showing him committing an unspeakable act. And finally the volume concludes with Young Avengers Presents #6, the first meeting between Clint Barton and Kate Bishop.

This Clint Barton is an action hero not a super hero. He would feel more comfortable in the Marvel Cinematic Universe, or Mission- Impossible Ghost Protocol. It is more MCU than the purple archer. During this volume he does not generally run with gods and giants, but honestly is facing off against the troubles of the common man. He spends his time in the streets and roof parties of the regular folks, and he fits in well in those stories.

I have not read much Kate Bishop. It was kind of fun watching the two referring to each other as Hawkeye, he did pass on the title to her. Bishop clearly cares for Barton, and romantic feelings may be there. She also may be a better shot and better planner than Barton is as Hawkeye. You get the feeling that she is a step ahead of the male Hawkeye. I like her, but I don’t want this series to turn into a romantic comedy/drama between the two Hawkeyes. There is part of me still rooting for Mockingbird! I did really like the addition of their first meeting since I had not read it before.

The current Nick Fury does show up in this volume. He discusses his desire to rebuild S.H.I.E.L.D., though he is just the field commander. He notes that he uses different tactics than his father. One gets the sense that Senior preferred blunt instruments, while Junior is more subtle. And much like Secret Avengers, I would say Fury’s bag of tricks includes deceit.

I really liked the art by David Aja showcased in the first three issues. It did not feel like a typical superhero style. If anything those first issues made me feel like I was in an old fashioned private eye movie. It set a tone visually that matched up well with Matt Fraction’s script.

I really liked Hawkeye: My Life as a Weapon, collecting the first five issues of Hawkeye and Young Avengers Presents #6. It is as cool as reported by others. I really enjoyed it. And to be honest I really liked that it collected a number of stories, making it easier to drop the volume between issues instead of feeling obligated to jump onto the next page and story conclusion. This could honestly lead Hawkeye into his most popular era ever!