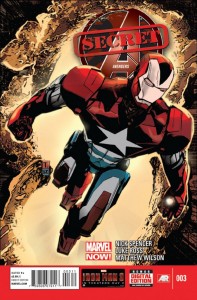 Secret Avengers has moved into its first real story arc. In Secret Avengers #3 the conflict between A.I.M. and S.H.I.E.L.D. moves forward as Fury and his team attempt to understand A.I.M.’s goals. With bullets flying in every direction, there are casualties!

Like Secret Avengers #2 , this issue follows two separate tracks. The first follows Director Daisy Johnson as she invites Nick Fury to join her at an arms exhibition. Johnson introduces Senator Robert Ralston the Chair of the Executive Oversight Committee for the newly reformed S.H.I.E.L.D. and a man who served with Fury’s father. The duo is shocked by two developments; a display of Norman Osborne’s Iron Patriot armor (now being used for drone operations) and the inclusion of A.I.M. to the exhibition. The second storyline follows a field team of Hawkeye, Black Widow, Mockingbird and Coulson as they investigate the remains of A.I.M.’s destroyed arctic base The Gate. In both tracks, excessive gunfire happens!

Okay, Hawkeye is so funny. We saw a glimpse of this in the first issue with the Nick Fury/James Bond conversation. But Hawkeye continues to get the best lines. Well actually, a sign stating when the last time a S.H.I.E.L.D. specific accident occurred has the best punch line. I really hope they can keep up this level of comedy as they move this series forward.

The phrase “Avengers Initiative” caught my attention! In this context I believe that this Initiative is the formation of the Secret Avengers and not the main Avenger team. But anyone who is familiar with the Marvel Cinematic Universe cannot help but take notice of the statement. Director Johnson in using these words seems to imply that it was Acting Director Maria Hill who supported the formation of Fury’s new field team.

Of course what I care about is the Coulson scenes. In this issue Coulson action hero continues. He is inserted into the field with the superheroes. My biggest complaint is that Hawkeye, Black Widow and Mockingbird all get their own action frame. Coulson comes up empty despite his participation. I am sorry we have all seen Hawkeye shooting an arrow, let’s get Coulson taking down his opponent. Though for us Coulson fans boys we do get one humorous Coulson frame to keep the flame alive until the fall.

As I finish Secret Avengers #3 I hope that the A.I.M. storyline takes several story arcs to revolve instead of 5 issues and out. This title really could be a James Bond/SPECTRE long-term battle with S.H.I.E.L.D. filling the Bond role. It is made clear that this is not our father’s A.I.M. and I would like to see Coulson battle this serious threat long-term.