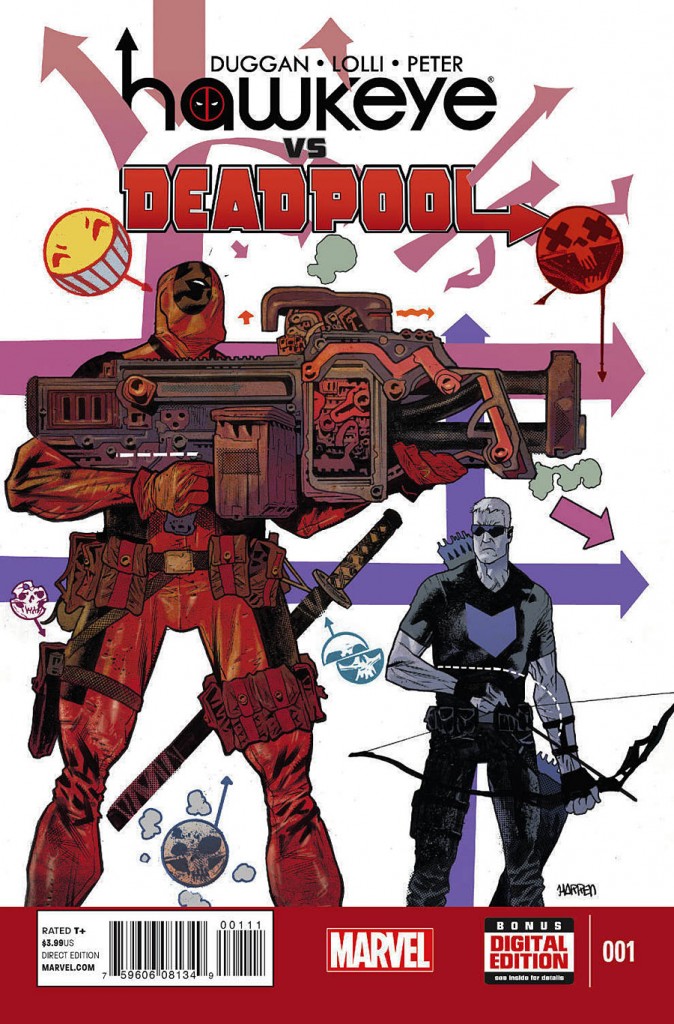 Preamble
Man, what does one do? Is Deadpool an agent of S.H.I.E.L.D. or is he just a contractor and as such does not receive a S.H.I.E.L.D. status. Geez, Agent Daniel quit over thinking this and read the funny of Hawkeye VS Deadpool #1.

It is Halloween night and a dead hacker has stolen a list of all of S.H.I.E.L.D.’s agents. Only Hawkeye and Deadpool, or maybe Tom Cruise, can stop this list from getting out into the open! Deadpool and Hawkeye follow the trail from Not Daredevil and Not Punisher to a psychiatric hospital run by Black Cat (Spider-Man not in this issue). The team-up is forced to fight a massive number of drones under the villains’ watch (Daniel Whitehall not in this issue) as both Black Cat and our heroes try to find the stolen list. Kate Bishop has her own team-up and helps the boys with a separate investigation.   And as the issue ends everyone wonders about Hawkeye’s mysterious visitor.

Seriously, I never realized that Hawkeye was deaf! And it leads to some semi-humorous moments as Deadpool may not completely understand that either. The serious tone around Hawkeye is what shocked me the most. Hawkeye is super serious in this story. Now, as established in Secret Avengers for Hawkeye his funny irresponsible side is an act. And as I keep mentioning he did lead an entire coast and some lakes chapter of Avengers. So he has to have something on top of his head. But the selling point of a team-up like this is the punny exchange. An exchange that I am still waiting to break out, because I do not want a straight man and a fool in this team-up, no I want full-on crazy quips and puns that will make Agent Avery blush! I get it; a dead dude on your doorstep is no laughing matter. But he is going to need to laugh. For the moment, it is a fun romp with one mouth tied behind its back. But I feel like if Hawkeye can loosen up there is a whole other level coming! I know Gerry Duggan (in the completely imaginary sense) and something even funnier is coming.

Kate Bishop meets Deadpool for the first time. And you have to excuse her, it is Halloween, so if she believes he is in costume you have to understand. Kate’s addition is a really nice touch to this story. Part of that has to do with the fact that Kate gets things done! We find out that two Hawkeye’s are truly better than one.

There is a roll-around on the floor moment for me. There is a costume in the Marvel 616 that even Deadpool finds distasteful. And it was right up my alley, meshing very well with my recent reading list.

Matteo Lolli and Jacopo Camagni are bringing me around to non-photo realistic art. So, I am going to murder this since I am not even close to an untrained art critic. The style is light and fun, without going to cartoony. And the images to me do not feel like they are so heavy they do not fit the story. They are in my opinion a nice fit for a Halloween story featuring two of Marvel’s biggest jokers. It has been a nice little interlude in my usually comic consumption.

I am happy with my decision to carry forward with Hawkeye VS Deadpool. There is a big S.H.I.E.L.D. element, a laugh I cannot get out of my mind and a great team-up. The addition of Kate Bishop only improved the book. And I was shocked to see not one but two classic female villains (see I only mentioned one). I think there is some great potential here and wonder if this title or Secret Avengers will be the first to mention when these two got together for the first time.