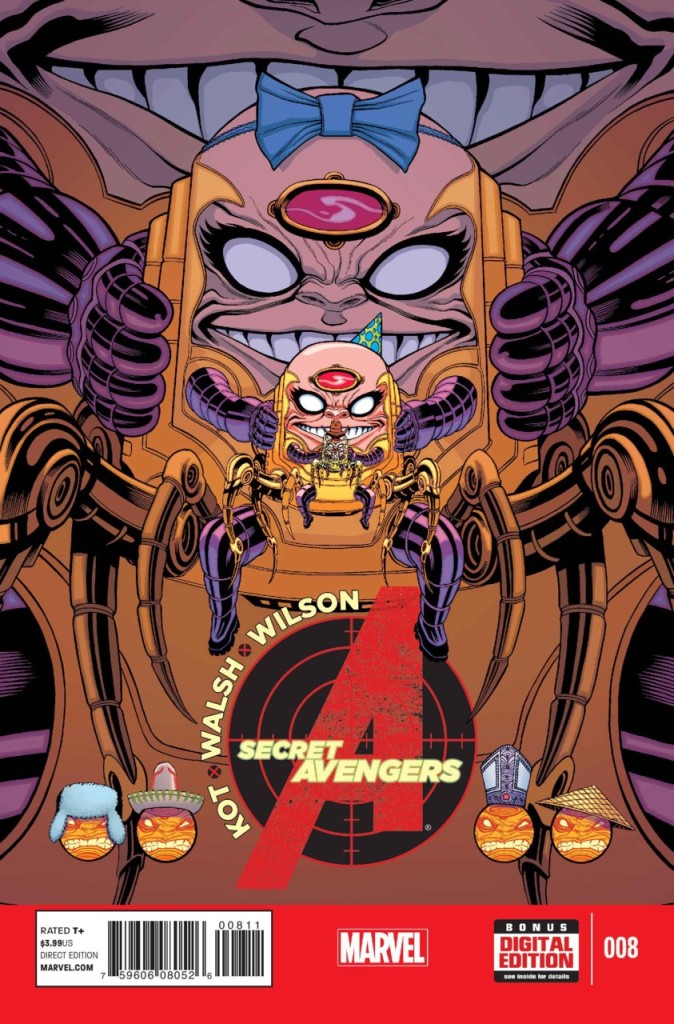 Secret Avengers has been doing what it does best, building complicated conspiracies! In Secret Avengers #8 “Tried to Run/Tried to Hide” Ales Kot and Michael Walsh begin to turn back the curtain to show us how things have unraveled to this point. And we might just be surprised what we find, cue the romance soundtrack Agent Ben!

Seven months ago M.O.D.O.K. made a breakthrough on A.I.M. Island, he reached into a mind-blowing place named Tlön. With this discovery in his back pocket, M.O.D.O.K. and Snapper made plans on a romantic beach to join S.H.I.E.L.D. to fulfill M.O.D.O.K.’s dreams. Today, Agent Hill shares with Spider-Woman her belief that someone on the hellicarrier is a traitor. I assume that the room is romantically lit! As the plot unfolds the reader becomes fully aware of the traitor and the fact they may be hindering through own plans, out of love!

Let us just get this out fast. There is no Coulson in this episode! And there is no Deadpool or Hawkeye! Now we are promised that Deadpool and Hawkeye and their budding bromance (cue music) will return in the next issue! I do admit that I miss my boys! But as we will find in a minute, having Barton around could have led to reflection on his past relationship with Jessica Drew. So, maybe it is best that he is likely in mortal danger since he is hanging with Deadpool.

Hill has a lot of revelations for Drew. But the biggest may be that Barton is acting! Hawkeye is not a fool, though everyone thinks he is. And he is not irresponsible, though everyone thinks he is. Hill thought that Drew probably already was aware of Barton’s act, because the two heroes dated. They got up close and personal (cue music). But no, Spider-Woman believes that Hawkeye is just a silly, out-for-fun, guy. But Hill knows he is more than meets the eye. And the fact that Drew does not know this may just show how deep the Hawkeye/Spider-Woman romance was.

Our plotter planned for everything, but love (cue music). So not everything has come to fruition as the villain planned. Because our plotter is becoming their own worst enemy. You might begin to think the plotter is Thanos, since he always does the same thing. But people really do silly things for love.

Secret Avengers #8 is a bridge. There is a big story developing and this issue catches us up and prepares us for a great culling which is coming. Will all our agents survive? Will any find a partner for life? Or will someone have their heart shattered?