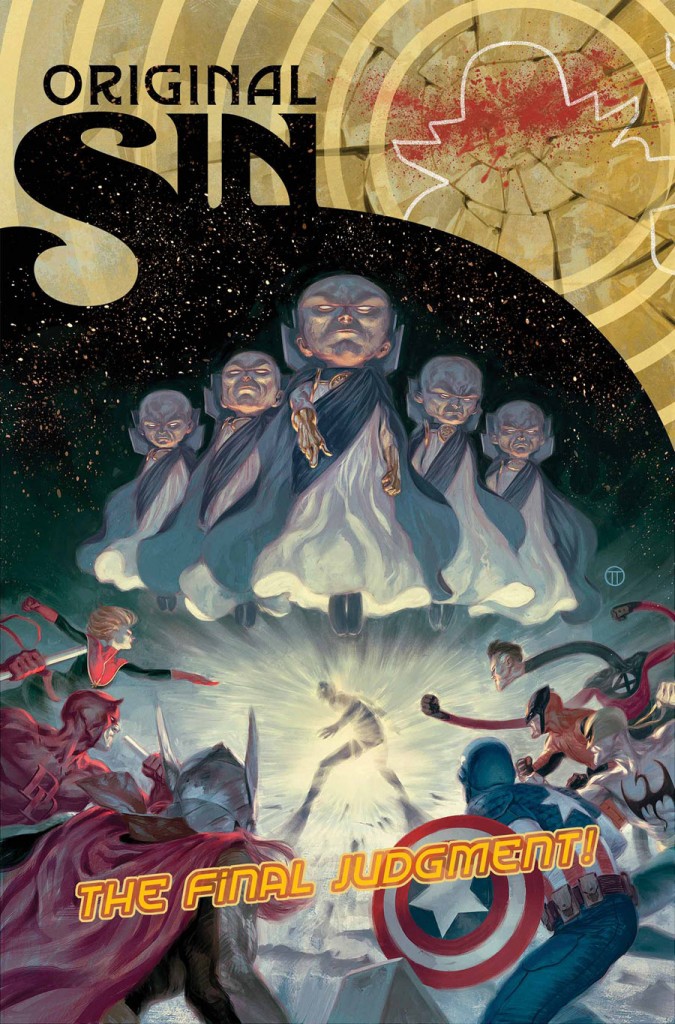 Preamble
New comic day was a busy night.  But there was a comic burning in my bag (actually two of them) and I knew I would not be able to sleep until I finished Jason Aaron and Mike Deodato’s Original Sin #8.  I needed to know so much.  Would Nick Fury live?  Who killed the Watcher?  Will one of Fury’s chosen take up his challenge?  How will Original Sin impact the Marvel Comic Universe?  I needed to know as this was a must read ASAP book!

The final issue of this mini-series flashes between two scenes on the moon.  The first setting is now as Dr. Midas, Exterminatrix and the Orb loot the Watcher’s house.  Nick Fury is the only hero standing in their way as the villains gather up weapons and secrets that could allow them to dominate the world.  The second setting is a few days earlier after the initial attack on the Watcher.  The scene is full of tension as Fury attempts to help the injured Watcher while lecturing him on his inaction and judging Fury of his actions with The Unseen.  With Fury on site, the Watcher lived his final minutes.   And it is revealed that Fury always knew who The Watcher’s murderer was.  But he chose his investigators to show them what he had been facing over the last several decades to see who would take up his challenge.  The story concludes with Fury taking on Dr. Midas for the control of the Secrets.  The story’s conclusion leaves changes for the Marvel 616 and numerous characters.

Level Seven Analysis
I am going to say the implications of Original Sin will stick.  We already know that Thor is going to be going through a major change.  And we got to see the beginnings of Thor no longer being worthy in the main issues.  We can assume that changes like those occurring in Spider-Man’s life will continue.  At the end of the story it also becomes clear that the story of The Unseen will continue forward on a re-occurring basis.  So though the changes this series brought forth may eventually wash away, I think they are events that will become referenced for years in Marvel stories.

Aaron does a great job contrasting The Watcher and Fury.  The Watcher has bragged about the amount of acting he has actually done.  But in the end, he really is a non-active participant in the Marvel universe.  But Nick Fury on the other hand has been a man of action.  He has kept the world spinning by doing the dirty work of the Marvel 616.  Yet, they are still uneasy friendly acquaintances; I will not go so far as to say friends.  But they are definitely reverse images of each other.  Fury was the first one on scene when the Watcher was originally attacked, because he does more than watch.  And he was sincere in his concern for The Watcher’s safety and the weapons stored in his house, because he does more than watch.

I have tried to stay spoiler free.  But I am willing to say that at least one hero comes to understand Fury’s actions.  And Deodoto’s depiction of that Fury understanding hero in the final pages is fantastic.  It calls back to classic S.H.I.E.L.D. stories and Jim Steranko imagery.  One frame set in the coldness of space with a gun in hand, well, that one frame may have been one of my favorite of the whole series.  And it is small enough, not a splash page, and quiet enough that some readers may speed right by it.

Original Sin #8 is a conclusion to a big story.  Did it pay off?  I am going to say yes.  I did not abandon the series to await the trade as I have done before with other similar mini-series.  I thought Aaron did a strong job ending the stroy while also giving us foreshadowing to other future events in multiple titles but without making a reader feel like they only got a partial story.  I only read the main series, none of the tie-ins.  And I never felt like I was only getting part of the story.  For the first time in the last year I can say I am glad I read a mini-series.  If you have not read it yet, you will want to pick it up in collection.

Agent Ben and I talked.  He thinks that now would be a good time to launch a new take on What If?  Honestly, he could be onto something.  He really really could!  I bet he would volunteer to write it.

Original Sin surprised me from issue one as Nick Fury shared a meal with Captain America.  I knew that Nick Fury was going to be in this title, but I did not realize that he was going to be the centerpiece of the story with him being retired for so long.  As a story, I think that Aaron treated Fury right.  He gave Fury a story that highlighted his determination, focus and willingness to do what must be done to keep the Earth safe.  The story also significantly added to the legend of Nick Fury.  And that was more than I could have ever hoped for.