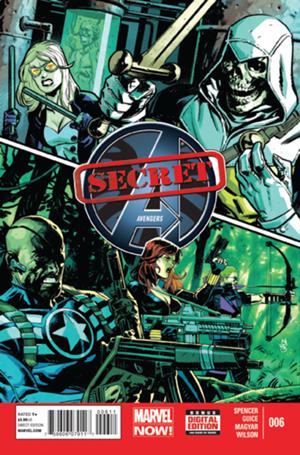 Preamble
Wait, something is up! Daisy Johnson is still being confirmed as S.H.I.E.L.D. Director! Nick Fury has not yet attempted his assassination on A.I.M. Island. And the Iron Patriot drone army is still causing trouble! That is right friends, issue Secret Avengers # 6 takes up back in time, back before S.H.I.E.L.D. caused an international incident.

Situation Report
The issue opens with Coulson. He is making a sincere pitch to someone to help out with the Iron Patriot army and it is someone he knows does not need to be bribed but instead is motivated by saving lives. Coulson’s story emerges again in the issue as he works with the recently recruited hero to neutralize the Iron Patriots. The second story shows Mockingbird attempting to contact Taskmaster on A.I.M. Island. It quickly become clear despite S.H.I.E.L.D. using Taskmaster as a shadow agent, things may not have gone to plan. In fact, they may have helped train A.I.M.’s army! And in a third story arc, Maria Hill and new U.N. liaison Charles Dalton discuss the future of Daisy Johnson’s leadership. And these conversations come to a head as the two debate what must be done in the wake of an S.H.I.E.L.D. assassination attempt on the A.I.M. Scientist Supreme, a U.N. recognized national leader.

Level Seven Analysis
Every month it feels like I have complained about Coulson, or at least tried to provide constructive criticism. Like Flynn Ryder, they just cannot seem to get his nose right. The creative team has balanced the used salesman persona with the experiences soldier Cheese. But they have yet to hit the homerun that was Clark Gregg. Now I will shut-up. Page one channels Clark Gregg. The art looks like Gregg. And the tone of Coulson’s dialogue is the most like what I would expect in the MCU for this illustrious character. Now that I know that this team can do a great Coulson I will probably forgive them whenever they attempt to try new things with his character. Cheese is finally becoming Phil!

Hey kids, no Fury. Yeah, weird. There is also no Black Widow and Hawkeye. The title still had a very S.H.I.E.L.D. feel to it, not Avengers. The absence of these three core Secret Avengers who have appeared in the first five issues does really help establish for me that this is a team book and not a Fury book.

It was very weird reading this issue. My stomach hurt because I knew that Daisy’s leadership was going to be attacked. And I knew what Fury and his team were doing on A.I.M. Island all off camera. It just felt off reading this issue knowing where some of these storylines were going. I think I would have been happier if issue #5 and #6 were swapped. I think the story that felt the most odd was the Johnson story since I knew that Hill was going to be taking the reins, even if her words sounds supported of Director Johnson. I think I would enjoy the arc more if they had been switched.

Issue #7 promises to give readers “nothing but the truth.” Lies, lies I say. Okay, really I do expect that we will find out that we have been operating in the dark. And maybe we will get the whole story on Fury’s status and how his mission to A.I.M. Island went wrong.