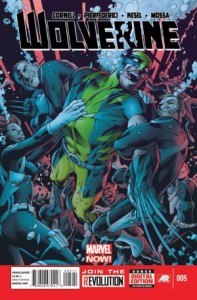 The “Hunting Season” is over, or is it? That is the question that Wolverine asks himself despite the fact that S.H.I.E.L.D. has identified the culprit behind the possessions Logan and Fury have been tracking. He keeps asking himself, if this story is at the end why is the Watcher still showing up?

The nanonite problem has been taken care of, so Fury invites Wolverine back to the Helicarrier Hercules to unwind. But Wolverine’s suspicions that something is not right prove true quickly as Fury and his agents attempt to subdue him. While running through the Hercules, Wolverine joins forces with Agent McDougall’s team which Logan equips with air masks out of concern that whatever is impacting Fury and his agents is airborne. As they move through the Helicarrier, Fury takes it under the waves. And due to Wolverine’s success against the contaminated S.H.I.E.L.D. agents, they open the bulking head and plan on “Drowning Logan”.

The cover is somewhat misleading about this story. It shows a large number of agents attempting to drown Wolverine. But really this image only captures the action of one page, and that is why I do not feel one bit bad about spoiling the storyline. Most of the story is Wolverine working through the Hercules evading S.H.I.E.L.D. agents. There are plenty of claws but little water.

Again, we learn a lot about Wolverine the man. He is trying to keep his rage in check around every turn. And while his companions complain that he cripples some contaminated agents for life and killed others, he does everything he can to control the berserker. Wolverine knows his past and does not wish to repeat the sins of his past. And we also learn Wolverine considers the new Nick Fury, Agent of S.H.I.E.L.D., a friend. Are they now drinking buddies? Do they plan join vacations? Inquiring minds want to know!

Atlantis beware! S.H.I.E.L.D. has their eyes on you. The Hercules has the ability to go underwater and go deep for one reason and one reason alone, Namor’s kingdom. So the mutant with the wings on his feet should make no sudden movements because those of us on land have a tool to counter undersea aggression.

I am thrilled that the bar bunch returns. The group back at Cheers, I mean The Guernica Bar, are invaluable to Logan. We find out that this group is connected, connected enough to get Logan valuable tactical information on S.H.I.E.L.D. giving Wolverine the upper hand. I really like the Bar Bunch, and would love to see them continue in this series.

We still do not really know what is going on with these possessions that now include Fury. Wolverine has a theory that it is not a telepath, but all who are contaminated seem to join a joint mind. What is clear is the “Hunting Season” is not over yet, but could be after the next issue.

Logan has a problem. Whatever is controlling Nick Fury thinks it knows how to take the uncanny X-man down. They are going to drown him! In the next issue, we get to find out how Wolverine gets out of this potentially fatal problem for the regenerating mutant!