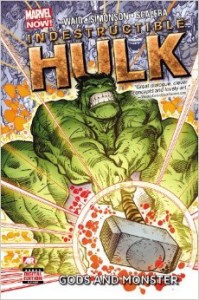 I really enjoyed the first volume of Indestructible Hulk. So Indestructible Hulk: Gods and Monsters written by Mark Waid and illustrated by Walter Simonson and Matteo Scalera had a lot to live up to. The three faced the problem of writing a compelling book out of a character who honestly cannot be killed and is best known for smashing.

Using the mantra of Banner builds, Banner uses a sliver of Thor’s hammer to transport his team to Jotunheim to mine Uru metal. Of course, his team gets stuck in this other realm and his crew is forced to fight Frost Giants, with the help of Thor to survive. As the two heroes combine forces, there is a lot of smashing! In the second tale, Hulk works with S.H.I.E.L.D. forces to intercept a weapons shipment linked to Baron Zemo. In the midst of this operation, Hulk abandons a S.H.I.E.L.D. field squad to team-up with his lawyer, Daredevil, to chase a missing gun down. In the climax of this story, Hulk and Banner’s true colors shines through.

Banner knows! Everyone on his team has a secret. He knows, but he believes that none of them know he knows. And he thinks that S.H.I.E.L.D. does not know their secrets, because if they did they would have never been cleared to work with Banner. It is clear that Banner intends to help his team overcome their issues and that his personal level of contact is one of the reasons he brought them into his team. In many ways Banner feels like Agent Coulson from Marvel’s Agents of S.H.I.E.L.D. because he has assembled a broken team around him. And like Coulson he intends to fix them, at least I am assuming for both!

Another Agents of S.H.I.E.L.D. vibe comes with Banner’s team in the field. I am assuming just like Fitzsimmons, not everyone in this team has been cleared to be in the field by Shepherd Book! And as I watched this team struggle in an ice world, with their smashing teammate, I could not help but think of what Fitz and Simmons would do in a similar situation.  For some of them, being in the field is over their head.

And finally, giving us an Agents of S.H.I.E.L.D. feel is the fact that S.H.I.E.L.D. cannot be trusted. Currently we see Coulson wondering on the big screen if he can trust his employers. Banner knows he cannot. Maria Hill makes it clear she is more interested in Hulk’s muscles than Banner’s brain. And she is obvious about it. So Banner has taken precautions. He has given information to his lawyer Matt Murdock. And if Banner disappears, S.H.I.E.L.D. will have a public relations nightmare on their hands. And Murdock definitely does not trust S.H.I.E.L.D. and would like his employer out of their service.

The Thor storyline is illustrated by Walter Simonson. Simonson is a classic Thor artist, and a perfect fit with this tale. It becomes clear quickly that Hulk is interacting with a classic Thor, not the current Thor: God of Thunder. So the addition of Simonson to this story with his classic Thor model is simply inspired

Indestructible Hulk: Gods and Monsters was a success for me. The inclusion of two guest stars was nice, but the use of Thor and its throwback quality was a giant win for me. And even if they are not intentionally taking the MCU Coulson and the 616 Banner into the same places, their character qualities are similarly compelling and gives me the expectation that the future holds more than action, I mean smashing.