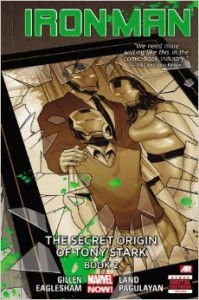 There I was sitting around the Hub describing “The Secret Origin of Tony Stark” to my fellow agents.  One of them looked over at me and said, “Clown Shoes!”  I get it.  It is a story that has evil robots, a Las Vegas heist, an robot bounty hunter with an attitude, a giant giant really big huge suit of armor and fundamentally changes the childhood of Tony Stark.  As you describe it, it really does come off as crazy (not Deadpool fighting zombie president crazy).  But in the end is it crazy that works?

Tony Stark is being held hostage by Recorder 451, who has decided that it was not enough to just watch.  His actions have lead to a death and destruction, every life counted as he works towards a larger goal.  And since he was playing the long game, he partnered with Howard Stark to save his unborn child while also genetically preparing the child to be a genius obsessed with armor.  Howard Stark is warned that Las Vegas aliens will be a threat to the youngster, so he gathers some friends like Dum Dum Dugan and Jimmy Woo to attack the aliens' casino and eliminate the threat early.  After being forced to watch his entire history, Recorder 451 looks to make Stark's destiny finally arrive.  451 uncovers the Godkiller Armor from the ancient Celestial War, a weapon that Tony has been designed to control.  Will Tony take up the armor and surrender himself to 451's plan?

In the end Kieron Gillen's “The Secret Origin of Tony Stark” is a big Sci-Fi epic yet very personal story about Tony Stark.  The conclusion of the story provides new insight into the Howard's relationship with Tony, Tony's place in the universe, and even how he has achieved his impressive legacy. The story also leaves writers with a new area to explore in Stark's personal life and perhaps even an area for growth.  But this is all done without a major retcon!  Iron Man was created in a cave, and this story really is about the Origin of Tony Stark.

I thought this story was “fun”.  The use of Death's Head is a great, and left me hoping that we might see him more in other places.  I would love to see Death's Head and Peter Quill interact.  Or even better, how about a battle where Rocket Racoon and this bounty hunter robot met!  Death's Head is a character created for Marvel's United Kingdom imprints, but he really should be shared throughout the rest of the comic loving world.

Clown Shoes!  How about childish?  What imaginative kid who played with toys like Transformers or Voltron did not imagine a huge giant robot to pilot.  And that is really what the Godkiller is.  And I will say that Gillen's imagination is a little bigger than my childhood imagination.  In the end, despite the armor being a massive weapon, the armor is really about destiny.  Will Tony give himself to the armor?  Will he lose himself to the pilot role and surrender himself?  Or will he continue to be a self-made man he believes himself to be?

I found Iron Man: The Secret Origin of Tony Stark Book Two to simply be fun.  it feels like a combination of Oceans Eleven meets Star Wars.  So I took some of it as tongue in cheek fun!  And the story cannot be ignored during the future adventures of Tony Stark.