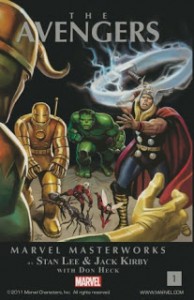 How does one prepare for the best television program of Fall 2013, well you start at the beginning of course.  To do this I picked up a copy of Marvel Masterworks Presents The Avengers.  There is no S.H.I.E.L.D., no agents, and younger or older Nick Fury.  But it does show us a first glimpse of our favorite super team.

The graphic novel collects the first ten issues of The Avengers from September 1963 to November 1964. All ten stories are written by the legendary Stan Lee.  Mr. Lee provides an introduction to the collection, noting that in the heyday of Marvel’s renaissance in the 1960s they realized that team-ups were profitable, leading to a permanent team-up book in The Avengers. The first 8 stories are drawn by legend Jack Kirby with the last two being drawn by Don Heck. The stories details the assembling and disassembling of the Avengers squad.

Loki served as the motivation for Nick Fury to assemble the Avengers.  This is so appropriate as it was Loki that originally brought the first Avenger team of Iron Man, Thor, Hulk, Ant-Man and Wasp together. It’s a great throwback to the first story that many fans won’t know about.

Most of us know the alter ego of the Incredible Hulk as Dr. Bruce Banner. Though some of us may remember Bruce Bixby playing Dr. David Banner on television during our formative years. Hulk goes by three different names in these original stories. They use the familiar Dr. Bruce Banner often. But he is also referred to as Dr. Bob Banner. Now this one threw me since I had not heard it before. Now technically he is Dr. Robert Bruce Banner, so Bob does pass the sniff test. But in one instance a friend calls him Dr. Donald Blake. Now this is an instance where an editor was needed since Dr. Donald Blake as we know from Thor is not Hulk but Thor. Clearly this was a mistake where an editor failed to pick up on the goof. But it is right that Hulk struggles with his true identity. In The Avengers a third actor in three films will be taking on the role. The Avengers simply continues 50 years of identity confusion for the green avenger.

Marvel warns you in the opening pages of issue 4 to treat the edition as a collectors’ item, because it features the return of Captain America and his addition to the Avengers. In 1954, Atlas Comics, which would later become Marvel Comics, cancelled Captain America and Cap’s days of fighting the Axis in Europe was over! In 1964, Mr. Lee and Mr. Kirby (who had drawn Cap) brought the Boy Scout hero back from the dead and publication limbo as a member of the Avengers. Of course, it’s not easy to have been gone for such as long time. Therefore, Steve Rogers has to battle with the demons of such a long time on ice (pun intended). In one scene he actually has a physical confrontation with his new partner Rick Jones as he attempts to model himself after Cap’s old deceased partner Bucky. And true to this original tale, Cap battled with the demons of being a man out of time in The Avengers also.

I am a dad of a girl. And the female heroes in Marvel Masterworks Presents The Avengers are not the role models I am looking for. The Wasp is well, shallow. She cares about looks, commenting constantly on how handsome men are or what they could do to be more attractive. And she is very concerned with her looks. And the other females in the first 10 stories are not much better. Susan Storm from the Fantastic Four in her one frame is too busy to discuss a pressing issue, she has a fashion show to go to. They are pretty much the opposite of the strong and smart Black Widow we have seen in Iron Man 2 and The Avengers.

Throughout these tales the Avengers continually fight a reoccurring opponent, themselves. Often the Avenger to get piled on by the rest of the team is the Hulk. Poor Hulk, he wants to be a hero but when you express yourself through smashing you are often misunderstood. And he is not the only Avenger who gets into a fight with one of his teammates. So if you had read these stories you would probably have not been shocked by a Captain America, Iron Man, Thor battle royale.

Reading an old comic book is an adventure! Stories were not as tight and slang is used that can lead to an unintended chuckle decades later. The stories here have points that make 21st century man laugh. One of my favorites is Captain America’s arch enemy Baron Zemo has had a hood stuck to his head for nearly 20 years after a World War II battle with Cap. It’s only in his latest struggle that he realizes he may want to search for a solvent, not just revenge, which could actually remove the hood. He declared he never thought of the idea! In another scene Wasp uses the phone to call the police. She’s in her miniature Wasp form not her standard height. I wonder if she had to scream and sounded squeaky to those on the other end of the line.

Marvel Masterworks Presents The Avengers is a great way to get yourself into a Marvel state of mind! In these pages you see the first meeting of the Avengers, the stories that started it all. They are an adventure written and drawn by comic book legends and well worth the read as you prepare for fall television viewing.