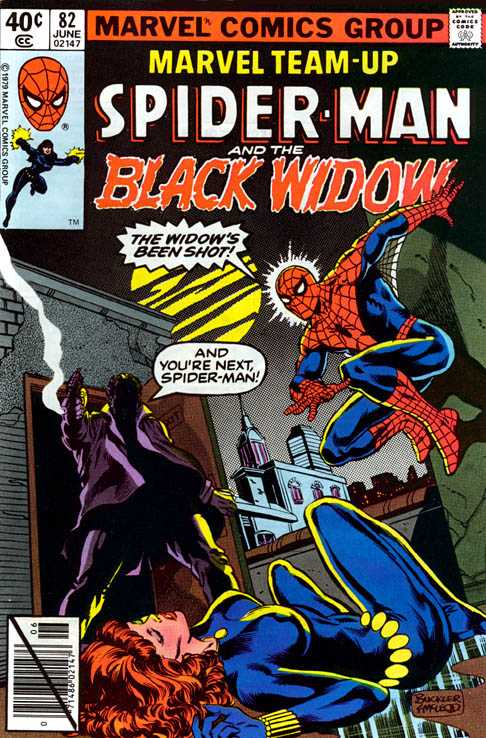 I have a political statement to make.  All of this talk about Secret Wars and Convergence at DC has put me on edge.   What is going to happen to Secret Avengers and Aquaman?  Will they even be titles?  What about the stories I feel invested into?  I cannot even tell you what titles I will be reading by the time the summer ends.  So here are my stages of grief.  First, I denied it going on record saying these events were no big deal.  Then I arrived at acceptance where I realized I could not stop the events.  And finally I have landed on full-on rejection!  Because here is the deal, these events are really not going to impact a story from 1979.

So let us start reading the old stuff and just have fun!

I present to you, Marvel Team-Up #82 featuring Spider-Man and Black Widow

A young red-headed woman walks the streets of New York city late at night.  She is suddenly attacked by hooligans!  But the fiends are beaten off by everyone’s favorite neighborhood Spider-Man.  But to Spidey this woman, with some impressive karate moves seems familiar.  She looks just like Black Widow.  But instead she claims to be upstate 3rd grade teacher, Nancy Rushman!  As Spidey attempts to help Rushman work through her situation, like determining what a Black Widow costume is doing in her handbag, a S.H.I.E.L.D. all-female strike team attacks Spider-Man and Maybe Not Black Widow for no apparent reason.  The story concludes with a shocking cliffhanger as gunshots from the dark are aimed squarely at our heroes.

Maybe I am too nostalgic.  But I really enjoyed this classic Chris Claremont, Sal Buscema, and Steve Leialoha production.  The story does not get bogged down in itself and keeps edging forward despite being what we would call slowly paced today.  We get time to linger on Rushman’s situation and question along with Spider-Man who she really is.  We feel the tension.  And the two big fighty fight scenes really do not  take away from the character development.  It is a really nice balance.  The only thing I really question is sometimes the art does not seem sharp, but these pages are over 30 years old so it could just be the wear of time.

I know I have discussed the Nancy Rushman situation before.  But here we do see some aspects that I had not seen before.  Rushman is scared.  She is not scared of being attacked or killed, she for some reason appears to have some serious fighting skills.  What she is scared of is being Black Widow.  She is a mild-manner teacher, she thinks.  She does not want to be is someone who lives her life through violence.  Really when we consider the saga of Black Widow, it really is a violent lifestyle.  And that easily can explain how it is hard to know her in the Marvel Cinematic Universe, even as a teammate.

S.H.I.E.L.D. has an elite all lady strike team.  No Dugan, you are not needed here.  Now it is led by the Countess, so you know she would only recruit the best!  You only know for sure that it is the Countess at the end when someone says her first name, but the hair lets us know.  Val is determined to get her girl, and it was worrisome knowing that such a capable agent was chasing our heroes.  I think the big question is when do we get her in the MCU?

Spider-Man is so topical.  I loved his inquiry on why S.H.I.E.L.D. is chasing Rushman.  He asks, “You fail Amy Carter or something?”  Oh Spider-Man your quips really do a great job putting us into the time.  No seriously, I joke but it really does show how Marvel has used Spider-Man as reflection of his time.

So time travelers set the coordinates to March 27, 1979, to pick up this June 79 cover dated book!  As I said with Marvel Team-Up #83, I want to track down this entire arc.  This storyline is fun and has no implications for the destruction of comic book continuity.  So read on and study agents!

In other news, it has been confirmed Aquaman will continue.  I just do not know if I am continuing with him.