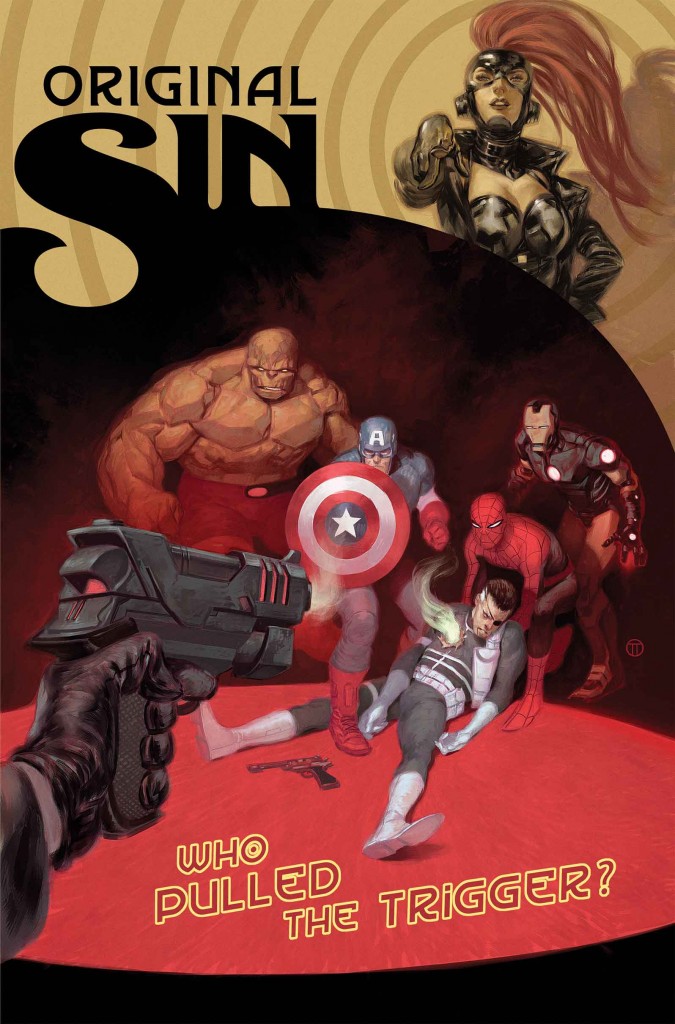 Dr. Midas and his daughter Exterminatrix retrieved some of the secrets from the Watcher’s eye.  But now they want more and they prepare a rocket to return to space and take all The Watcher’s secrets hidden in the eye.  Meanwhile on The Unseen’s satellite, Fury further explains himself.  And the question everyone has is who killed The Watcher.  He admits that he selected the heroes who followed The Unseen’s trail and he laid the crumbs of murders taken on The Unseen’s behalf.  Meanwhile, Captain America tired of Nick Fury’s secrets assembles the Avengers to follow another trail, which may leads to Fury.  These paths all converge as Dr. Midas and Exterminatrix attack the space station.  As everything comes to a conclusion, Nick Fury suits up for what could be his final battle.

Level Seven Analysis
If you told me that Jason Aaron and Mike Deodato were giving us a love letter to Nick Fury in Original Sin I think I would have accused you of pulling my leg.  But really this is what it is, and after being on the shelf for so long I am ready for it.  Aaron and Deodato treat Fury well and give us a Fury that we know and understand.  Every reader understands the motivation of the super spy and the urgency in his actions.

Fury has set up a trail to educate others to the purpose of The Unseen.  Fury believes that he will need someone to fill his role sooner than later.  And he hopes that seeing some of the actions he took on behalf of Earth will help his handpicked heroes to understand the need of The Unseen.  Even after seeing it these heroes cannot really believe the role The Unseen has taken on Earth history, have they not saved the Earth countless times?  But what Fury wants them to know is that a secret war and a secret soldier has allowed them to face only a trickle of threats.

Nick Fury does show some sentimentality.  And as he expressed it I felt a little sad with him.  So as he pulls on the battlesuit he will use in the final battle of the story, I emotionally suited up with him.  If Fury has to bow out to his son at this point, even if it is a comic book death, I would be okay with where Aaron took him in his end.

Gamora gets the purpose of The Unseen and the best line of the book.  She cannot understand why Earth has not yet been conquered based on the evidence she has on hand.  And I am glad she is there to express her feelings.  And I am glad Rocket is there too as the two are being some levity to a tense story.

Does Nick Fury answer the question?  Well, I’m not going to tell you.  And with The Unseen sitting in the room with Marvel’s greatest heroes I sometimes do not even know if it matters anymore.  I am too busy sitting on the edge wondering if this really is Nick Fury’s last ride!