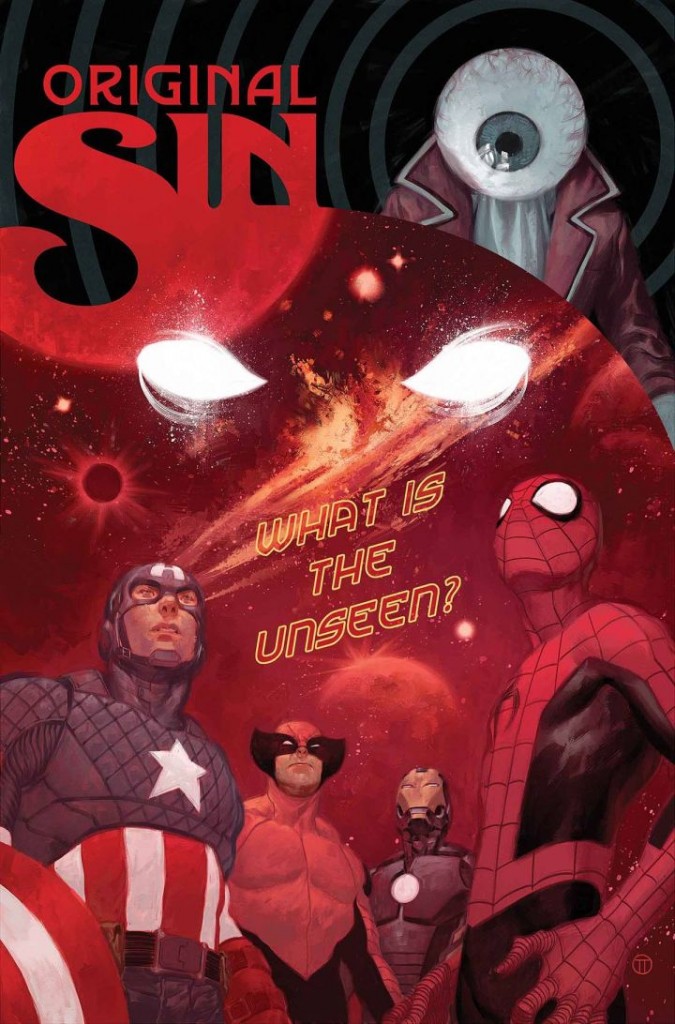 “You want the truth, you gotta go back. Back to 1958. And of all places…Kansas.” Yes Jason Aaron, you had me with the opening line of Original Sin #5. Please take me on a crazy fun trip!

In 1958 while working for Army Intelligence, Colonel Nick Fury helped stop the invasion of the Earth. In this encounter he met a man named Woodward McCord and another named Howard Stark who would introduce Fury to the larger universe he lived in. For every alien invasion he knew about there were ten others that were never public. As he learns the secrets of the world he becomes part of a bigger scheme as he discovers one man ultimately is in charge of securing Earth’s safety from below, other dimensions and outer space. Nick Fury learns of the man whose name we will never know, The Unseen. And because of this knowledge the Watcher died and perhaps so will Fury.

Okay, wow. There were times as S.H.I.E.L.D. fan I could barely breathe during this issue. Original Sin #5 finally spills some of the secret history of the Marvel 616 in its pages instead of tie-in books. And it is big. And you get to learn a lot about Nick Fury. He is a man with a passionate love, for his planet. He trusts himself to get things done. And he is willing to make sacrifices because of how much he cares for his world. Fury joined S.H.I.E.L.D. to support The Unseen’s mission. He, as we know, will make the hard choices. So his involvement with The Unseen should not shock us.

Seriously, for fans of S.H.I.E.L.D. history this story is a delight!

We also learn that Howard Stark is the one that introduced Fury to the world of The Unseen. It is Stark who arms and funds planetary security. And Stark uses the resources of The Unseen to reverse engineer technology to enrich himself and supply The Unseen.

The Unseen is not a madman. He is the one who watches in the shadow, but unlike the Watcher he acts. He dispenses justice, but he does not do so out of malice. We are shown a scene where The Unseen assesses a young Marvel hero for threats, and lets him pass as he might be a hero. It is because Fury knows who The Unseen is that I think he might really die! And I am talking Uncle Ben dying here!

I have said too much and so little. Could those who murdered the Watcher now be after me? Because I know what cannot be known. I know the Unseen!