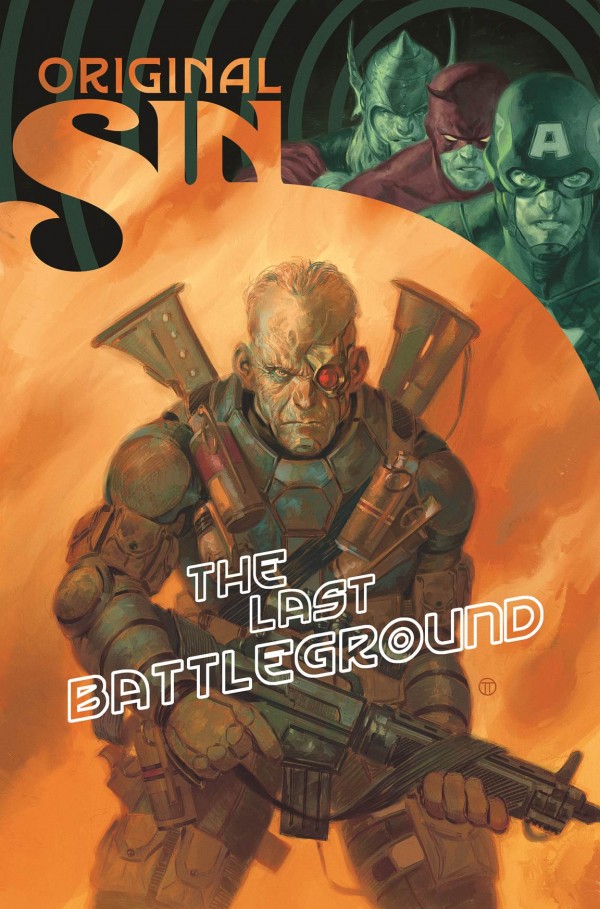 Preamble
In the last issue of Original Sin, Nick Fury suited up for what could have been the last time. Fury is under attack from every corner as villains and Avengers look to make Fury pay. And Jason Aaron gives us a big clue to who might have killed The Watcher!

Nick Fury is under attack! The Orb, Dr. Midas and Extermatrix days ago attempted to steal from The Watcher, and when they entered his home The Watcher was shot. Now, the Avengers attack Nick Fury’s satellite hoping to bring an end to his secrets, but Fury puts up a fight. And Fury’s agents which investigated the murder debate which one of them should join The Unseen. The Orb states he knows the secret that killed The Watcher, while the power of those secrets appear to make him stronger than ever. As the issue closes we go back to the attack on The Watcher as we see the beginning of what happened through one key character’s eyes (not the eyes that Fury is carrying around which used to belong to The Watcher).

Level Seven Analysis
Clap, Clap, Clap! That is the sound of me applauding Julian Totino Tedecsco for an incredible cover. I love that it shows the wear on Nick Fury Senior while also showing the determination. This is a man who has saved a world, over and over again. And sir you have treated Nick Fury right!

Why am I excited about the idea of Jason Aaron on Star Wars when Marvel takes over the franchise? Well it is this story right here agents! This tale is big and epic and well written and has the weight of a game-changer to it. Jason Aaron, you get to pick assignments in my eyes and if you can continue this trend Star Wars is in great hands!

And Mike Deodato’s interior art continues to be strong. My favorite shots, other than a close-up of Fury on the moon, is Fury in space. Fury wears a spacesuit throughout these scenes that feels like a classic Jim Steranko model. In fact, I am pretty sure Deodato has followed the pattern from Nick Fury, Agent of S.H.I.E.L.D. #6, and I love the idea that if this is Fury’s last dance we get classic imagery in the finale of Fury’s life.

We have all heard about the big changes in Marvel 616 including a new Cap, Thor and Iron Man attitude. Those changes start now as the trigger that leads to Thor’s big shift occur in this issue. And I’ll be honest, the trigger is something we do not get the full reveal on and it made me curious. Sometimes the smallest things lead to big changes. And I really do want to know what is going down.

Fury cares for Black Widow almost like a daughter. Fury has avoided recruiting Black Widow to his cause because he has hoped that her character would not be like his own. Instead Fury hoped that she was closer to a man that he admired, Steve Rodgers, than himself. And he has made choices to keep her from walking the path to The Unseen! I really enjoyed this peek into Fury because his observations of Black Widow are similar to what we all hope in the Marvel Cinematic Universe.

Captain America has hope. He does not believe that Fury has crossed the line yet! Cap hopes to redeem his old friend despite any monsters he has killed. Fury however believes that he crossed the line a long time ago and Captain America will find out the truth soon. As a reader with a bigger picture of the story than Cap, but less than Fury, I find myself in a tension as I wonder if Fury has gone too far. He did save us over and over again when others could not. I am still pulling for the old soldier and the belief that his decisions have been righteous.

The preview for the final issue promises judgment. And we must assume that Nick Fury will somehow be judged and I hope found to be innocent (well as innocent as a superspy can be). It also promises big changes in the Marvel universe as we have already seen one change start now! The creative team of Aaron and Deodota have crushed this story with pretty much every issue, so I find myself having a hard time waiting for the conclusion!