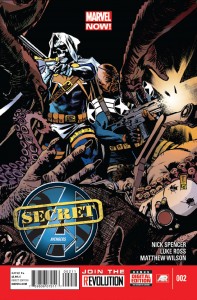 It has become clear that those who wish to follow the comic adventures of Agent Coulson need to follow Secret Avengers. In Secret Avengers #2, the team has been formed and it is time to kick the New Nick Fury into larger story arcs. But for me the big question is simply, will I be happier with Coulson?

Secret Avengers #2 follows two main storylines. In the first, A.I.M.’s (Advanced Idea Mechanics) Supreme Scientist has uncovered the end of humanity and the secret to stopping it. This is a secret that he dedicates himself to hiding so it cannot be used. And to support this goal the Supreme Scientist gathers the government of A.I.M. island by recruiting super villains. In the second story, Fury visits the villain ran nation of Bagalia. His goal is to take custody of the imprisoned Taskmaster. It is not clear why he is imprisoned, but it cannot be good when you are put in the jail of a nation of bad guys. The citizens of Bagalia see this as an opportunity to capture Fury, which results in a street battle that includes Fury, Hawkeye, Black Widow, Coulson and the newly added Mockingbird.

So my first, and only concern, is how is Coulson portrayed. In Battle Scars he was a tough soldier. But in Secret Avengers #1 he was a used car salesman. I would say this issue improved Coulson’s depiction. He makes it into the field in this issue, serving as the driver of a flying car (please Ben don’t be right about Lola). While he proves his worth in the field he also gets the opportunity to make a sales pitch to a new character. And compared to issue #1, this offer is direct and far less sugary sweet. Overall, I feel like the depiction of Coulson improved.

I am intrigued with the addition of Mockingbird. Will there will be tension between Hawkeye and her? They did used to be married. And the few issues I have read of Hawkeye do not include her as the potential female love interest. I liked this addition because there could be a lot of fun to have with putting her into the mix on a regular basis.

Secret Avengers is moving out of the development phase. Clearly we are on a path where the A.I.M. story and S.H.I.E.L.D. story intersect. With the addition of Taskmaster to the story and Coulson in the driver’s seat (literally) I am ready to jump into the next issue.