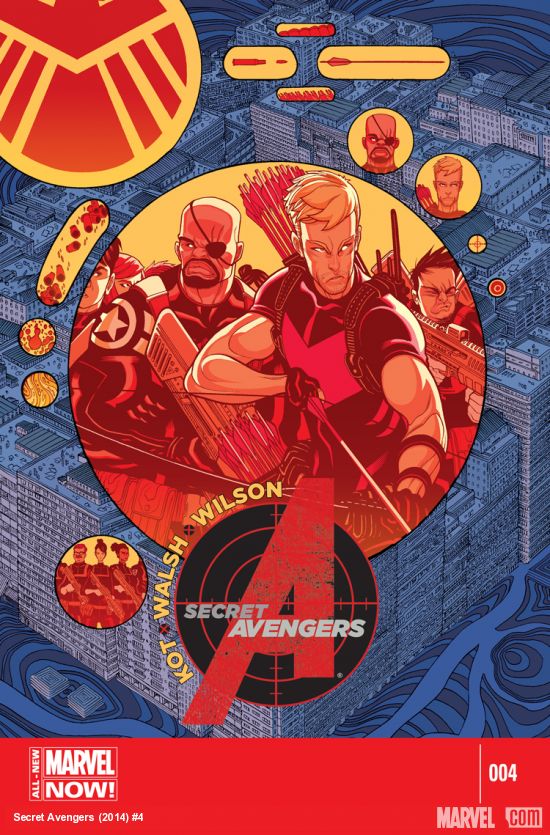 It took Nick Spencer seven issues before he showed he misunderstood why I was buying Secret Avengers. Ales Kot did it in four! Sure, Hawkeye and Black Widow appear in this title, but there is only one Agent that leads me to buy this book monthly!

Agents Fury Jr. and Barton travel to China to find and capture the Fury that Agent Coulson defeated in space. You know because it has fallen to Earth due to that whole gravity thing. They go to Kowloon, a walled city that should not exist which has been ran by the Triads for over a century. They fight the Fury while Hawkeye quips. Meanwhile Agent Hill and M.O.D.O.K. discuss science and interrogate Hill’s failed assassin. And in the end we discover that everything has a price.

Four issues in and no Coulson. Sure he’s not one of the longstanding superheroes like Black Widow and Hawkeye. But they both have their own book. This is the Coulson book. Secret Avengers is the closest thing we get to an Agents of S.H.I.E.L.D. tie-in. We need Coulson to be here every month! Please don’t take my Coulson away!

I find Fury Jr.’s interactions with Hawkeye curious. He is very very stiff around the archer. And you get the feeling that Fury Jr. is learning about the man, you know the one he spent an entire volume fighting beside. Maybe he feels guilty for shooting him in issue #1 of the last volume. Or maybe, Agent Hill has worked some mojo to make us all forget that run of Secret Avengers even exists. Or maybe just maybe Fury Jr. is pretending to not know the man solely because he does not want him to remember that he was on this team before and quit! Now that is the angle I would love to see taken because that could trigger some cool stories. But I still do not know how much of the last volume Marvel wants us to remember.

Okay, usually I have to make a comment or two about Maria Hill and M.O.D.O.K. and the romantic tension building between the two! And there are some good moments between the mad scientist and the superspy as they share tea and discuss the morals of how Hill behaves (sadly it appears M.O.D.O.K. has the high ground). But really it is the M.O.D.O.K. and Snapper relationship that I have to call out. These two, the mad scientist and his assistant are developing a relationship similar to another Disney pair. Dr. Bunsen Honeydew and Beaker. This relationship just has a little more malice! I really like the loyalty I see in Snapper, its like I can see into him (the area around his brain is completely transparent). And if there is a breakout development in this title it is not the absent Coulson but the bromance between M.O.D.O.K. and Snapper. This sort of thing is bringing a camp presence to the book that I am liking and perhaps can help it stand out on its own.

I am pretty sure I have said it before and will say it again, but all I want is a consistent Coulson presence in Secret Avengers. But there is a large part of me that wonders if comic book authors know what to do with him. I have a suggestion, take some of the fun found in M.O.D.O.K. and give it to good old AC. That way M.O.D.O.K. can quit being the break out star of this title.