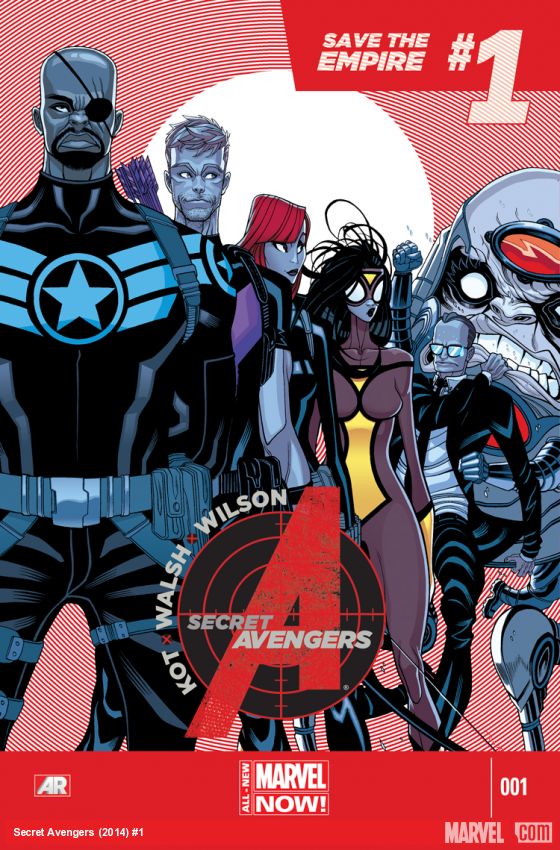 I admit it, I am hesitant.  With the beginning of Secret Avengers Volume 2 I was in the same boat.  I was not familiar with Nick Spencer’s writing and the whole concept on the team but they had Agent Coulson to draw me in.  But then by the middle of Spencer’s run I was hooked with the big spy story that he was telling every month.  Now that the co-writer from Spencer’s run Ales Kot has taken the helm and with the art of Michael Walsh I feel like everything is changing and I have wondered if it would be for the better.  Would the All-New Marvel NOW! version of the Secret Avengers work for me?

A new Secret Avengers team has been assembled by S.H.I.E.L.D. to fight clandestine global threats, and their next mission starts on Friday.  This is not Friday!  Agents Fury and Coulson are tasked to repair a S.H.I.E.L.D. satellite before it crashes.  But while completing their repairs they activate the Fury cybiote that only wants to kill all life!  Black Widow and new Secret Avenger Spider-Woman share a spa day of massages and guns.  Their day is interrupted by the arrival of former Secret Avenger Hawkeye, another thing they share in a former boyfriend, on the run from A.I.M. agents.  And Agent Hill inspects M.O.D.O.K.’s Lair of Mad Science where things do not go as planned!  All of this sets us up for a cliffhanger that leaves many of our agents in peril.

Secret Avengers #1 is the first half of the “Save the Empire” story arc.  I am not sure what Empire is being saved, but it does serve to reassemble the Secret Avengers team after it was decimated at the end of the last volume.  Agent Coulson apparently was not a Secret Avenger, though his liaison duties did make it seem like it!  Good old AC is now a full-fledged Secret Avenger after complaining about not participating in enough deep field action.  I am hoping that means that Coulson will appear more often after his long absences in the last volume.  Also added to the team is Spider-Woman, who has served S.H.I.E.L.D. before and should provide Black Widow with a comrade she can rely on and confide to.  Basically to me she takes the Hawkeye role on the team.  Fury Jr. is back as team leader.  And Hill of course directs all of S.H.I.E.L.D..

And then there is Hawkeye.  At the end of the last volume Hawkeye resigned.  Yet here he is front and center on the cover of Secret Avengers #1.  How could this be?  The story has him slipping nakedly back into the clandestine world of the Secret Avengers.  And he has not spoken about his past experiences with the team or even seems to know of the team’s existence.  Now we do know that Hill erased his memory.   So one has to wonder if he will either join the team, someone will accidently tell him he was on the team, or if he figures out on his own that he was once a Secret Avenger.

Daisy Johnson and her little team are nowhere to be seen!  Will a new solo writer let her slip off into the sunset?  I will admit that this does seem odd since she seems to have joined forces with the Winter Soldier, and he seems to be key in some future movie of little consequence!

Agent Coulson likes space!  It would be fun to see that on a Tuesday night.

After reading this issue, I have to assume that the M.O.D.O.K./Hill dynamic had to have been brought to the story by Kot.  This tension continues over from the old volume with smart dialogue and tons of (can I say it) sexual tension.  It is a little weird thinking that these two, one a nice looking female and the other a floating giant head could be heading that direction.  But hey kids, love is blind!  And the dialogue is smart and enjoyable when they take the page together.

Michael Walsh’s art is less photorealistic and more stylized than I am used to.  I think it will take some time for me to get used to his style.  But I can see myself growing to like or even love it.  It kind of gives me a film noir feel which could match up really well with a super spy story.  It could seem like some images are not completed.  But I understand this was a choice and it does give the tale a gritty tone.  And I really love his tributes to the past when blocking out the naughty parts of the story!  And Walsh has impressed me with an image I cannot get out of my head of injured member of the team.

And with Kot’s writing there is plenty for me to hope for.  First, maybe Coulson will be better used in this volume than the last.  Though, this issue he felt more Cheese (Marvel 616 Coulson’s nickname) than AC.  But I think that does take time to properly capture.  The M.O.D.O.K./Hill dynamic as noted is really strong.  And I kind of want to see the tension between Hawkeye and his ex-girlfriend and his work wife play out on the page.

Okay, I will be back and not just because I feel obligated to track the book that brings me AC to the page every month.  I see some potential here.  And there is some building from the volume before.  I see enough in this issue to make me hope for a bright future for the Secret Avengers.  And hopefully like Spencer’s run, time will allow Kot and his team to fine tune their story into something both the fans and the creators really enjoy.