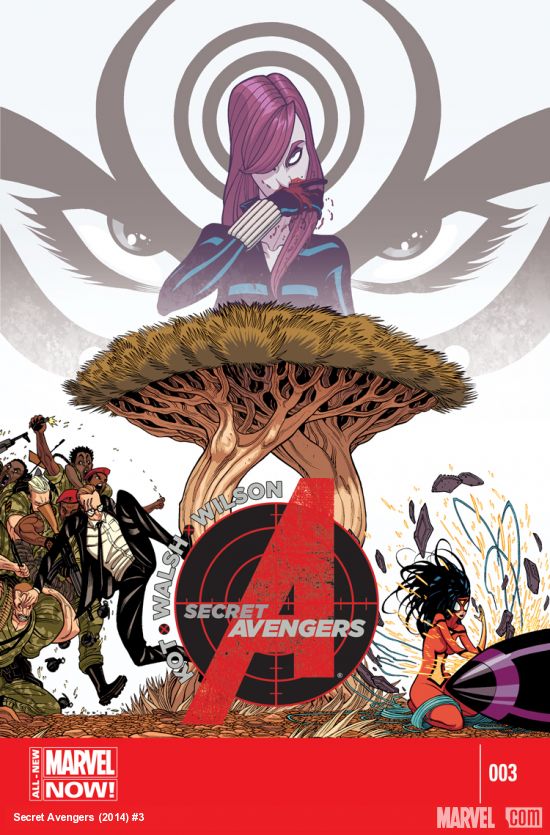 Preamble
As this new volume of Secret Avengers begins I will admit to being a little lost. It does not help that at times the team seems newly formed, even though Spider-Woman is really the only new member. I guess this is a good thing because it serves as a jumping on point for new readers. But to make this title worthwhile to television viewers you better get Coulson right!

Situation Report
As the title opens we get a glimpse into the future. Fury Jr. lies in a hospital bed. Black Widow holds onto something at high speeds. Coulson and Hawkeye face off. And M.O.D.O.K. sits on a front porch! We then come back to now and it’s everyone’s first day as a Secret Avenger, including Hawkeye. Hill splits the team into two groups. Black Widow, Coulson, and Spider-Woman intercept an arms dealer with a thinking bomb. And Hawkeye and Fury hunt down a monster. And of course, these stories do not lead us back to the first page continuing to leave us in the dark about M.O.D.O.K.’s retirement.

Level Seven Analysis
Fail, Ales Kot does not get Coulson right. In fact he offended me even more with his depiction of Coulson in this issue than Nick Spencer ever did. Yeah, I said fail. Basically, Coulson in the field, thank you for that, is not the Coulson we see Clark Gregg play. In the end, we do get closer to the AC we all love as the story concludes. But it really takes some time. And yeah, I said offended.

So while I am ranting. I do not like the cover. Is this some sort of Alice in Wonderland thing here? Basically it is not to my taste. I am sure others enjoy this style, but I am a pretty simple guy.

But I am coming around to Matthew Wilson’s art. And I do thing it complements Ales Kot’s offbeat writing well. I love his introductions of each Secret Avenger including a tip of the cap to the Marvel Cinematic Universe. The combination of art and offbeat writing could make this the quirky fun book we all want to pick up!

Hawkeye is back on the team. He is officially a Secret Avenger, despite walking away at the end of the last volume. Yes, we remember that but he does not! And I love the tension between him and the work wife and the ex-girlfriend. This is going to be really fun to watch play out.

Hey, can we get a tie-in book for season two maybe?

Conclusion
I miss A.I.M. vs. S.H.I.E.L.D.. I miss Coulson and Fury Jr. walking around like they were experienced agents. But I am still here and will be next month too. And with Hawkeye back in the camp it feels like the team I want. And the chemistry is attracting me back.