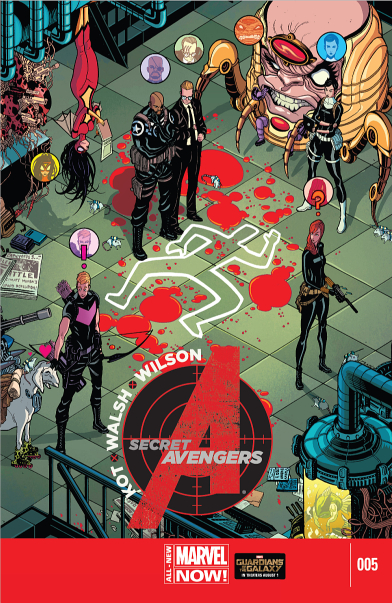 It’s been established I only want like 9 things. And along with the occasional cool drink, a warm blanket and Thanos as a big bad I want someone to get Agent Coulson right in the comics. And Secret Avengers #5 has everyone commenting on the fact that Coulson is not himself.

This episode of Secret Avengers all takes place abroad the hellicarrier Iliad. Agent Hill considers the murder of her would be assassin and whom she can trust in the investigation. And she has coffee with M.O.D.O.K.. Agent Coulson apparently is suffering from Post-Traumatic Stress Disorder and is upset that his last mission may have been a setup. He just wants some time away and Hill is not sympathetic. Spider-Woman talks to a sentient suicidal bomb named Vladimir, getting their issues out on the table. Fury and Hawkeye enjoy time in the mess. Oh, and Black Widow figures out one of Hill’s most important secrets.

I have tried and tried and tried to love Ales Kot’s version of Secret Avengers. But I have missed Nick Spencer’s spy story. Seriously, I want to know what Daisy Johnson is going to be doing next, not in this episode. And perhaps Kot just needed time as this issue finally has given me a spy feel to this title. There is a conspiracy. There are secrets. And not everyone can be trusted.

Everyone is saying it. Coulson is not himself. This is the thousand-yard stare Coulson from the second half of Season One. He is moody, not punny and definitely not on his game. It makes the thing that happened last episode almost explainable. What everyone knows about Coulson is that he is a good agent. But he does not see to have transitioned well from support staff to field team in these first few issues. Maybe like on Tuesday nights, after moody Coulson is gone we can get our Clark Gregg Coulson in the comics.

Everyone raves about this title and how good it is. My local comic shop guy says he puts it on the top of his pile, and this is high praise. It is at the top of mine, but because of Coulson. A lot of folks are enjoying the offbeat nature of the book. Maybe I have spent too much time analyzing how it has or has not carried over from the last volume. That does it, I am letting it go and giving Secret Avengers a new start in the next issue. Because, this issue did take steps towards getting it to the complex spy story I wanted.

Hmmm, we get random images of Hawkeye firing his bow in the final pages. That has to mean something, right?

I am a simple man who just needs a few things, like ten of them. And making Coulson a big part of this volume will hopefully make one of my dreams come true. Agent Phillip Coulson as the emotional heart of a S.H.I.E.L.D. comic title could be well on its way.