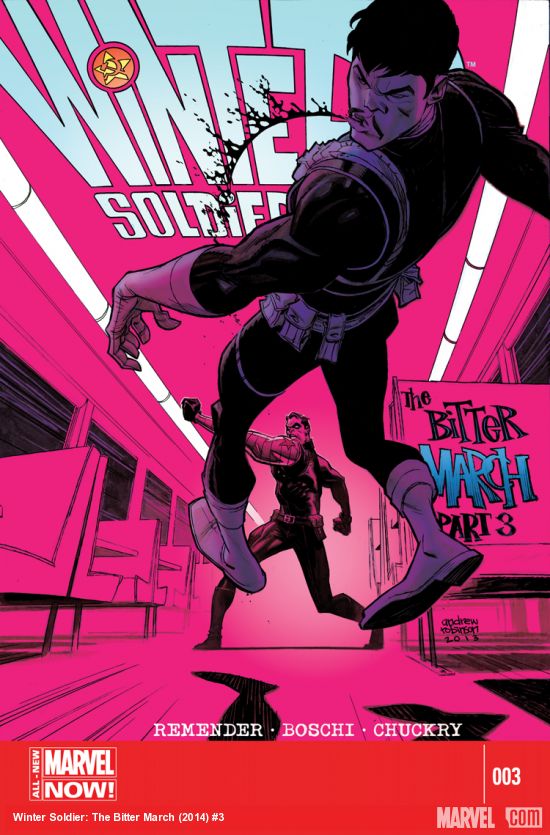 Rick Remender’s Winter Soldier: The Bitter March is in full action mode with issue #3.  And in the wake of the success of Captain America: The Winter Soldier on the big screen it could not be happening at a better time.  This issue has all the explosion and spy action that one would want from James Bond, I mean S.H.I.E.L.D..

It is a three-way battle for the lives of former Nazi scientists Peter and Mila Hitzig in 1966.  S.H.I.E.L.D. (Agent Ran), the Soviets (Winter Soldier) and Hydra (The Drain and Shocky Dan) battle on a train to take custody of the inventors of the Alchemy Formula.  And it is a brutal battle, where some will not make it off the train.  Ran Shen may only survive using Nick Fury’s training and toys!  In the midst of battle, the Winter Soldier reflects on who he might be and the identity of an American who has links to his past.

I really do like this story.  And I think it honestly is a great prelude to Captain America: Winter Soldier the comic story.  You get to see Winter Soldier struggle with his identity and it is not happening at the best of moments, in the middle of a mission.  And we see his Soviet controllers struggle with leaving him in the field or pulling him back before he might remember whom he is.  The Drain also does not help the situation as his power of suggestion attempts to pull away the Soviet programming.  It is nice to see the moral compass this assassin has.  His former life and mentor does intrude into his actions.  And for one character that is the difference between life and death.

I still like Ran Shen.  During this issue he gets to play with toys, Fury’s toys.  There is a watch that is more than it seems (classic Bond) and we have a medicine that I wonder might have effects beyond this series.  We also see that Ran Shen is willing to give it all to meet his mission and protect the pretty girl.

Did I mention this story is brutal?  The action is bloody and even our hero takes some hits.  And on this train full of civilians there is plenty of collateral damage.  In From Russia with Love the results were far from as cruel to the civilian population.

Winter Soldier: The Bitter March #3 was a quick read because it was a fun read.  Issue #3 has confirmed my choice to follow this series.  And seeing how a writer can play with the assassin makes me want to see more of him in the Marvel Cinematic Universe.