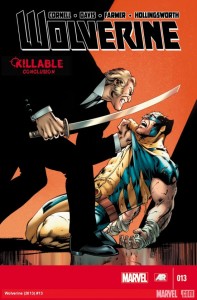 Sure they say it is the conclusion of a six part arc.  But really this “Killable” story has been going on for 13 issues!  So I was hoping that “Conclusion” would help provide some relief to my beloved Wolverine and to my bank account as I have a number of monthly comics launching in the next few months I need to, okay want to, read.  Would I be able to get resolution in Wolverine #13?

Wolverine is shattered, beaten, and barely alive!  And Sabertooth uses this moment to monologue, a lot, about the similarities between the two.  Meanwhile Fury Jr., Hill and the Host fight nanovirus controlled S.H.I.E.L.D. agents as they attempt to stop the attempt to end their global takeover.  To fight S.H.I.E.L.D., the nanovirus makes Wolverine an offer that he cannot refuse!

I am honestly just not in love with this story.  It has been Fury's inclusion that has kept me here.  And that is coming from a Wolverine fan.  It is possible that maybe this story would do better in a trade, or if about an issue of story was removed to quicken the pace.  But again for me being a Wolverine fan I did not enjoy this story.  Honestly, if Nick and Logan interacted more my satisfaction level would have been higher.

I am going to say I did get resolution through.  Wolverine is being released next month as part of the All-New Marvel NOW!  Though it appears the next story will build on these thirteen issues and take Wolverine on the next step of his journey, and after Sabertooth's massive monologue Logan has a lot to think about.  I will admit, I will thumb through issue #14.  But unless the story returns to the Logan and Nick buddy story, well I just be following Wolverine in Wolverine and the X-Men.

Resolution is a good thing.  And after following Wolverine for over a year, well I am ready for a change.  It is time to follow Deadpool for a bit as he prepares to get married and get his “Monies” from S.H.I.E.L.D..