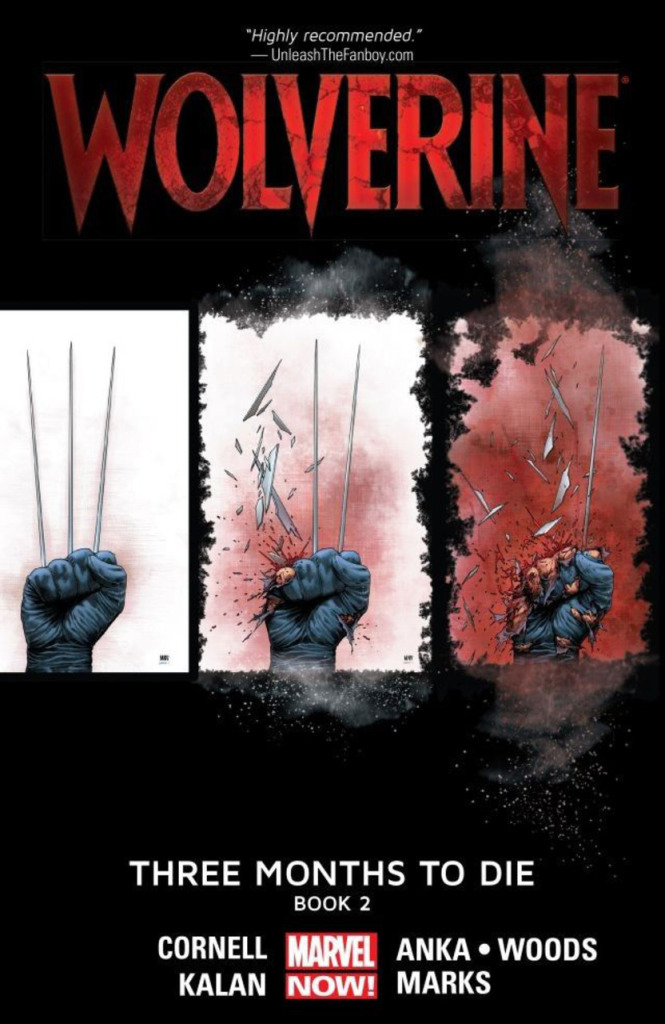 Wolverine: Three Months to Die Book 2 was never intended to be a Comic File. No, reading about the death of an Agent Butcher top ten superhero was meant to be “fun.” And throw in the fact that I did not enjoy the first issue of The Death of Wolverine, this was a collection I was just going to breeze through. It is not like Wolverine: Three Months to Die Book 1 made the cut. And then someone dropped the name Coulson…and I did not even have notes to guide me!

After going undercover with the crime boss Offer, Wolverine returns to the world of heroes. But first he must get over his fears, so Shang-Chi and Iron Fist take him to Death’s holiday island retreat for a chat. Wolverine then reconstructs the bridges he burned with his numerous friends and allies including the Bar Bunch and the X-Men when he recently went undercover. Wolverine and his allies then come together to keep Sabertooth from reconstructing the Earth in his own feral image. Will Wolverine learn his lesson and work with a team to save the world and his former villain teammates (who really are nice guys and gals)? Or will he try it alone and die at Sabertooth’s claws? Along with this story are three back-ups. One is a What-If story that follows up on the micro-virus storyline where Wolverine lost his healing ability. The story asks what if Wolverine had asked the virus to give him back his healing factor. And another story tells the history of the Guernica bar, which has links to S.H.I.E.L.D..

Nick Fury Jr. only says Coulson’s name and we never see good old AC. But the name drop has significance! Junior says, ‘Coulson heard you were back, split the team in two, sent us straight here” First, Fury Jr. is following orders given to him by Coulson. Second, Coulson is the one who set-up the mix of superheroes and S.H.I.E.L.D. to face Sabertooth’s threat and Hand ninjas. Though he is off screen the whole time, is this Coulson taking a step towards his job as Special Ops Supreme Commander? One frame, one mention, and maybe I am reading too much into the moment.

The story of the Guernica is S.H.I.E.L.D.tastic. We discover that the bar got its name with the help of Nick Fury. And that Fury, Dugan and the boys liked to play games of chance in the backroom. This could explain the picture of the Countess on the wall. Also we found out that during his teens that Fury was in Spain during the Spanish Civil War. In short, Fury has been around battle a long time.

Wolverine is the one who has to learn in this story. And the lesson is about going solo vs. being a member of the team. Now you would think that a guy who is on 18 teams would have already learned this lesson. But he still needs some learning. Now I will not tell you if he does learn, though it is a title with his name on it and he is the hero. But what is established is he has a lot of friends. And I loved seeing Fury Jr. and Logan again sitting down, working together and discussing philosophy. I would love another significant team-up of these two. Too bad currently one is dead and one is in a coma!

Who else is philosophical, Life Model Decoy Monkton! This LMD has sentience and has considered his life, afterlife and his ability to evolve. His ability to be self-directed reminds me of LMDS in Avengers A.I. and even some call-outs to Nick Fury vs. S.H.I.E.L.D. (which is becoming a yearly read for me).

I had issues with Paul Cornell’s last volume of Wolverine. I kept buying it because of Fury Jr., who in some cases was just in a frame or two. I found that story too long and I really was cheering for Wolverine to die already so the arc could end. So please let me say that this newest volume of Wolverine helmed by Cornell is much better. Cornell introduced new and interesting characters. And bringing in figures like Death for a discussion was a really nice chat. There is an attempt though to reconnect Wolverine’s actions to the Watcher’s appearance, which still is a slim thread to me. But I found this new story with its spy elements and Wolverine going rogue with guns pretty cool.

For those of us tracking S.H.I.E.L.D. Wolverine: Three Months to Die Book 2 is a must read. There is a literal S.H.I.E.LD. army in the book. And we get Fury Senior and Fury in the same volume, though not together. Those who like Wolverine stories are sure to be entertained as we count down until Wolverine’s final days.