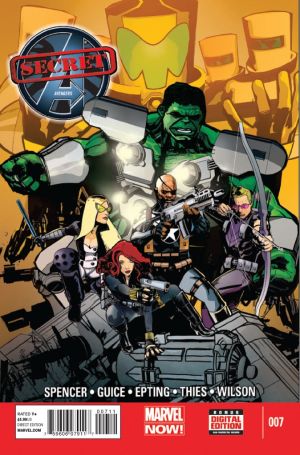 At the end of issue #6 faithful readers were promised answers in the saga of Secret Avengers. I was concerned that it may all be lies! Other than Coulson, okay and Barton, most S.H.I.E.L.D. agents seem truth allergic. Would Secret Avengers #7 just bring more deception?

Secret Avengers #7 takes place before the events of issue #5 and the apparent death of A.I.M. Scientist Supreme at Nick Fury Jr.’s hands. The issue breaks into three main scenes that are jumped unto between the pages. In scene one, Maria Hill storms Daisy Johnson’s helicarrier, Illiad (what a great name), and removes her from the directorship of S.H.I.E.L.D. for launching an unauthorized assassination against the leader of a U.N. member nation. In the second scene, Taskmaster and Mockingbird work to infiltrate A.I.M. headquarters. And the third scene follows the events after Fury Jr. pulled the trigger and our heroes attempt to escape with the assistance of Agent Banner and War Machine. The fully in charge Maria Hill pulls her team out of the mission as the story comes to an end, making a sacrifice that I still find shocking.

No Coulson! issue #6 brought us no Fury Jr., and Coulson is absent from Secret Avengers #7. I guess our little comic is growing up. The cast of characters on the title page has about doubled since the premier issue. And I think we can see that author Nick Spencer is showing that to balance all of these heroes he is not afraid to cut out a key character for an issue. Fury Jr. and Coulson have both been absent an issue in a story that I have personally identified as theirs. But then I am the guy who wants this to be only a Coulson/Fury Jr. book.

Stone cold, that is what you are Maria Hill. You are cold. She makes a decision at the end of the issue that puts one of our heroes at harm. And she manipulates the entire team in a personal and horrendous way that violates their basic rights! She spends the majority of her dialogue for this issue lecturing Daisy Johnson about putting agents at risk. And though she may claim her decision puts one agent at risk to save three more, and therefore the logical choice for the greater good, what she did is just stone cold! Cobie Smulders I just cannot look at you the same way again. Stone Cold!

A lot of my reaction to Hill’s decision is tied to the Hill/Johnson dialogue. Hill lectures Daisy about putting agents’ lives on the line. Yet Hill’s decision at the end puts a key agent at risk. This will work nicely for story development purposes in issue #8. Still, Hill just comes off as a hypocrite making a decision that I think she would scold Johnson for. But then, Hill is now in charge with this issue and her toppling of Daisy’s leadership (I love Johnson pointing out to Hill that the last time she was Director was thanks to the efforts of the Skrulls).

Mockingbird and Taskmaster in the last two issues have been operating away from the core of Hawkeye/Black Widow/Fury on A.I.M. Island. As things get hot, Hawkeye shows concern for Mockingbird, despite that he himself is in the middle of a fire fight. I really do want to see these two crazy kids get together after reading West Coast Avengers years ago. Please Mr. Spencer, let love survive!

Truth, there is truth in this issue. And that includes who did Fury Jr. kill on A.I.M. Island and how the Scientist Supreme is still alive and kicking. Reports of his assassination have been exaggerated. And it all makes sense now, mostly. Of course it also opens the reader up to the possibility that there is a double-agent in S.H.I.E.L.D.’s midst. The obvious choice is the mercenary Taskmaster who may be not just a double agent but a triple agent. But I would love to see the super brave choice of one of our core team as a traitor, even if it is just temporary.

Truths were told, truths were told. They did not lie. Of course we do continue to have a cliffhanger which might help us come closer to a conclusion with this A.I..M. story arc. But do we have to? I am still hoping for 12 to 14 issues of this spy versus spy story before we get an A.I.M. respite.