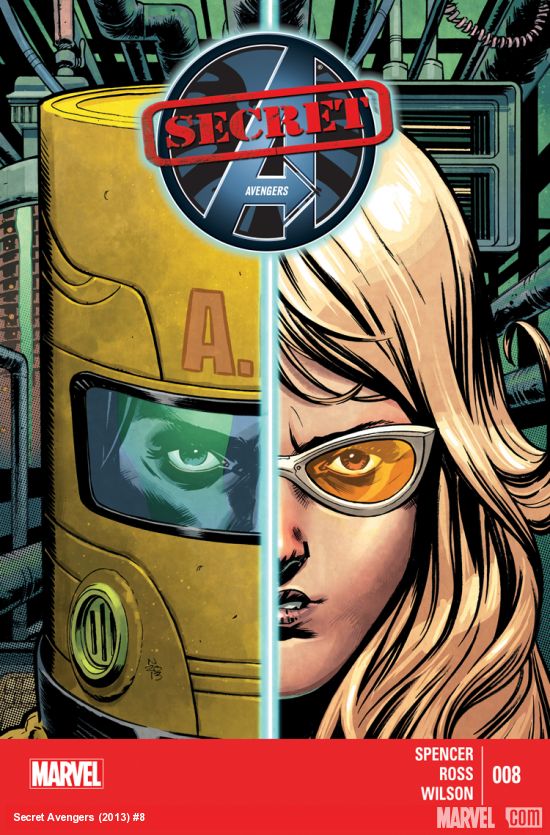 I am going to say something that I have never said n my entire life. As I picked up Secret Avengers #8 “Cathedral” all I could think was I am really looking forward to this Mockingbird story. I have never in my entire life bought a comic because of Mockingbird’s role. I have honestly only saw Mockingbird as a supporting actor. But yet here I am excited to see what will happen to Agent Morse on A.I.M. Island.

Bobbi Morse, Mockingbird, is lost. The last thing she remembers she was working out in the gym. Now she’s on A.I.M. Island. She does not know why or how. She has heard of a S.H.I.E.L.D. attack on the island. She assumes she is connected to the attack, but has no idea how and why. And there is the fact that everyone sees her as Harold Bainbridge, a middle-aged stocky A.I.M. biologist. She knows she will be uncovered as she looks at Bainbridge in the mirror, she knows nothing about the man so eventually she will give herself away. Events for Morse come to a head as Bainbridge is required to present to the Scientist Supreme and the other ministers of the A.I.M. government.

Nick Spencer congratulations. In an action comic title you have crafted a compelling character driven story where there are no big set piece battles, limited superhero action and no over the top comic physics (okay, other than why does Bobbi look like Bainbridge). Instead this is all about the predicament that Mockingbird is in and how does she get out of it, if she even can. This entire issue is really about the drama of the situation. And the reader finds themselves feeling for Bobbi, sharing in the tension of what happens when she gets caught. And added to this is the question of identity as Mockingbird sees herself through someone else’s eyes and someone else’s reflection. Not knowing how she got to A.I.M. Island and why she appears to be a man leads Bobbi to reflect on who she really is. And as a reader her answer that she jumps to makes me a little sad for her.

I have argued in the past that comics have not handled female heroes well. Often they are made sexual objects wearing little clothes and having stories that are weak (cough cough New 52). As the father of a young lady, I want strong female heroes. My daughter should not always have to look to male heroes when picking up a comic to enjoy. But here in the “Cathedral” we have a super strong female driven story where as a male reader I am also caught up in the tension. But then as I think about it, the entire run of Secret Avengers is based on strong women. Daisy Johnson, Maria Hill and Natasha Romanoff all have provided the backbone of this book. And none of them, along with Bobbi Morse, have run around in bikini costumes. They have been strong, decisive and independent, not needing a man to call the shots. As I reflect on this run along with Marvel NOW!’s early Captain Marvel issues, all I can say is Marvel is handling the female hero right!

Sad confession: Coulson does not appear in this issue, and issue #8 is my favorite of Spencer’s run on Secret Avengers to date! Hopefully an issue will pay off with a ton of Coulson for me in the future. For those keeping track this is two consecutive issues that are Coulsonless.

Usually I only comment on story and not art. I do not feel qualified to evaluate art and I only tend to comment if I think it takes away from the story. But I love this Nic Klein cover. This I believe is the first Secret Avengers' cover that focuses on one hero instead of a group. And I love the concept of half of Mockingbird’s face combined with half of Bainbridge’s A.I.M. uniform. It really helped highlight the tension in the story and caused me frustration as I could see the cover but had to wait all day until I could read the issue. Honestly, I would love to commission a tribute to this cover with Agent Daniel in Mockingbird’s place.

I have to admit, I almost as excited about issue #9 advertising “Wanted Daisy Johnson”. That ensures that we will see Hill and Johnson opposing each other yet again. Secret Avengers and Spencer are clearly finding a way to showcase the female hero in a way that male readers (like me) can enjoy without making them objects! Good job Marvel!