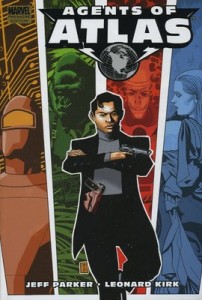 For fun, I like to relax with a nice issue of the distinguished competition's Aquaman.  But after two years there is something potentially upsetting with that title, Geoff Johns is leaving.  But when I noticed that Jeff Parker the new monthly author had written for Marvel and had written a S.H.I.E.L.D. related book, Agents of Atlas went to the top of my list.

In 1958, FBI agent Jimmy Woo assembled a super team of Gorilla Man, Venus, Marvel Boy, and M-11 the Human Robot to save President Eisenhower from the clutches of Yellow Claw.  This team was only assembled for six months, with Woo later joining S.H.I.E.L.D. and rarely seeing the field again.  Today, Agent Woo is a man near retirement age.  But though he is in his senior years he had assembled an off the books S.H.I.E.L.D. team which were attacked while they were investigating the Atlas Foundation.  Only Woo barely survived.  With Woo in intensive care and Hale being interrogated by his S.H.I.E.L.D. bosses, M-11 recalls Woo's old team to save their leader and continue his investigations.  The team investigates all things connected to the Atlas Foundation and the corporation's connections to Yellow Claw.  The conclusion of the story reveals all about the true names of Woo, Atlas and the members of his team.

I really enjoyed this collection.  It was fun, retro and smart.  Parker's writing is full of adventure (which I hope continues in Aquaman) and fun as he uses characters from Marvel's past like Gorilla Man and Venus that most modern readers would not be familiar with.  Additionally, Leonard Kirk's pencils are a prefect compliment to Parker's script.  Overall, this was very well done and I would love to see this team of author and artist pair up again.

What does an undying super-intelligent human gorilla do?  Why join S.H.I.E.L.D. as a commando of course!  Through Hale's eyes we get to see an whole new side of S.H.I.E.L.D., one were superhuman abilities are an asset.  And we see a S.H.I.E.L.D. strapped for resources as they are thrust into the events of Civil War.  The assets at Dugan's disposal to recapture Hale and Woo are very limited.  And because S.H.I.E.L.D. is stretched so thin, Dugan can only task Agent Derek Khanata to track them.  And of course being only one man, he virtually becomes part of Woo's team.  I do love Dugan showing his concern for Woo.  Dugan notes that Woo basically became a paper pusher in S.H.I.E.L.D. and that during his FBI days he was a great field officer.  Dugan would love to see Woo die a fighter instead of in a hospital bed.  And I enjoyed seeing this Woo, a younger man of action, when I am only familiar with him as a more senior S.H.I.E.L.D. executive in Nick Fury vs. S.H.I.E.L.D..

This is pretty much a prefect example of a trade done right.  I have been stumbling on some collections lately that have the main arc, but for supporting material Marvel gives us issue one of a related but separate story arc.  This is a fail to me, I bought a trade to get complete stories.  I did not buy it so you could convince me to purchase another collection.  Marvel here gives the whole story plus.  They provide us the entire Agents of Atlas arc.  But they also print the inspiration of this series, What If #9, where Woo's team debuted years before.  And in addition, since many readers are not familiar with the team, they provide the origin issues of every super powered member.  And along with all of this material is excerpts of the social media pieces Parker wrote.  Yes, this is how to collect a story!

I feel good about the future of Aquaman!  Wait this is the wrong website for that!  Honestly, I highly recommend Agents of Atlas for the fun retro adventure that it provides.  And I loved being introduced to interesting older heroes like Gorilla Man and Marvel Boy for the first time.