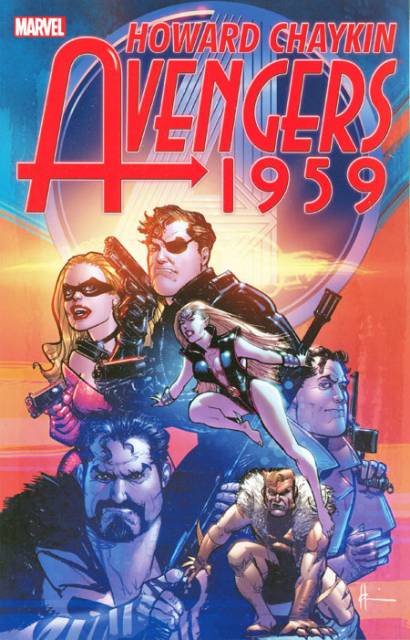 With a vintage look and feel I was pretty excited to try out Howard Chaykin's Avengers 1959.  I wondered if this story would help capture some of the potential feel of Agent Carter.  And with Nick Fury working with villains as heroes my interest was peaked.  But would it stay there?

During World War II Nick Fury led a rag tag bunch of heroes named the Avengers who helped overthrow the Nazis.  Years later the Avengers are thrown back to together as it appears the country of Latveria is serving as a gateway for re-emerging Nazis.  Fury and his teammates go on a global adventure to uncover the mystery of the red skull coins and uncover the plot that could put freedom into danger.

Avengers 1959 feels like a James Bond movie!  That is very fitting since it was the Connery Bond movies that got Fury redesigned as Marvel's super spy from a solider.  The feel is complete with the ladies that Fury interacts with, the clothing, and even Howard Stark filling in as Q.  If this was a movie, I am pretty sure that I would want to see it.  And as someone who has recently watched Dr. No, I will admit that vintage spy movies do stand up very well.

The Avengers as a group were very surprising to me.  Seriously, Sabertooth is one of the good guy, or at least the grey guys.  But I will admit that Sabertooth felt like the Comedian to me in The Watchmen especially with his attitude towards women.  And through I had never seen this group of Avengers before I felt like I had seen them before as the Minutemen in The Watchmen.  So the impact of seeing Kraven the Hunter as a good guy really did not have the impact on me it should have.  If anything I wish this team would spend more time interacting with Fury, or being lead by Fury, instead of  being separated from him for a good portion of the story.  And I did find myself preferring another vintage team, the Agents of Atlas who also featured Namora.  The Atlas team seemed more approachable despite having a member who is a human gorilla!

Avengers 1959 puts us into a Marvel story that could have been.  It is a fine story, but I do prefer Jeff Parker's Agents of Atlas which takes itself less seriously.  Though there is plenty one can learn about setting a S.H.I.E.L.D. tale in the past from this collection.