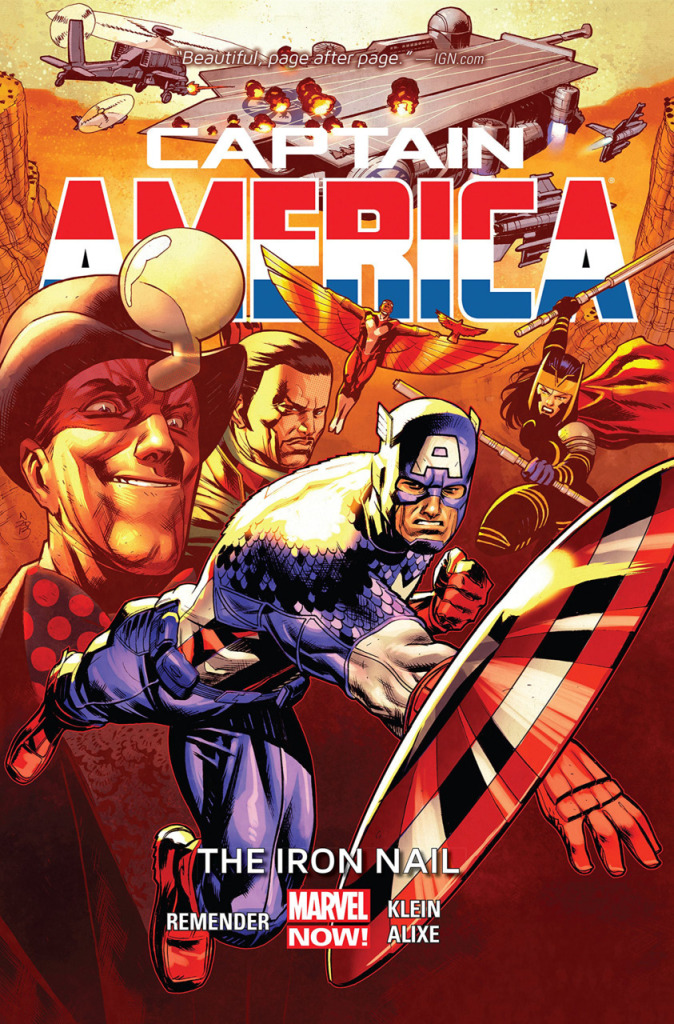 Author Rick Remender and Steve Rodgers have been through a lot together since the kickoff of Marvel NOW!. Remender has provided Rogers an entire lifetime in another dimension, given him a family and stood beside Rogers as loved ones passed away. In Captain America: The Iron Nail, Remender takes Rogers on one last ride wearing the red, white and blue.

Captain America’s new ward, Jet Black, questions her role in this new dimension, a dimension she was raised to rule. She meets a new potential ally and friend of her father, the Red Skull. Meanwhile, at the Hub former S.H.I.E.L.D. agent Ran Shen frees his ally Dr. Mindbubble after 50 years of captivity. The villain now known as Iron Nail uses Dr. Mindbubble to control the actions of Nick Fury Jr., who in a dream believes he is fighting the forces of Hydra. Instead, Fury gives Iron Nail control of the new advanced Gungnir hellicarrier. Iron Nail uses the Gungnir to expose S.H.I.E.L.D.’s evil nature and turn the world against S.H.I.E.L.D.’s agenda. The story ends as Captain America and Iron Nail fight for control of the Gungnir. And the outcome of the battle has a high cost for Steve Rogers.

Dr. Mindbubble, or former S.H.I.E.L.D. scientist Horace Littleton, is a trip. He seriously has bubbles coming out of his head, yes he has literal mindbubbles! And once he has you in a bubble you are trapped in a dream in which he controls you. And there is only one way out of the dream! Again, he has bubbles coming out of a hole in his head. I am not making this up. Additionally, his vocabulary has not changed in 50 years being locked up in a vault and all (Agent Ward should take note). He drops words like sister, man, baby and brother throughout his dialogue, showing how cool he is. So how does a guy get a hole that releases mind control bubbles from their head? Well, Littleton was a scientist who was working on a counter weapon to Captain America, Wolverine and pretty much any unstoppable hero. He was combining Super Soldier Serum with LSD. But having run out of funding and test subjects, he tested himself. And you get crazy bubble man!

Agent Ran Shen may have been S.H.I.E.L.D.’s third best agent, after Fury and Dugan, during the 1960s. Now he is a man who hates the West with a passion. And of course, he hates S.H.I.E.L.D.. For those of us who read Winter Soldier: The Bitter March we understand why Iron Nail’s loyalties so quickly changed! And his anger is very much more than just a 50-year grudge! I would say that his journey has been transformative.   Ran Shen has moved from more a James Bond clone to a true and horrible monster! The Iron Nail will leave a lasting impact on Steve Rogers, at least until we get closer to Avengers: Age of Ultron. But I really wish we could find a way to redeem Iron Nail and get him back into the S.H.I.E.L.D. bureaucracy.

Gungnir is the mythological spear of Odin. And this is all we need to know. If it is the weapon of Odin, well it has to be pretty impressive. The hellicarrier Gungnir is a pretty impressive weapon. While reading this story fans will get a feeling of déjà vu, seeing contrasts between this story and Captain America: Winter Soldier. Though this hellicarrier has an upgrade that would delight Agent Ben and fans of Japanese giant robot movies.

Issue 21 found in this collection includes a headshot of Agent Dum Dum Dugan that I find epic. I totally geeked out on Nic Klein’s visual depiction of the old crusty agent. It is these kinds of images that do an excellent job of supporting the overall story.

Quick note, Agent Fury Senior was a man who could make the hard choices. Agent Dugan can do the same thing!