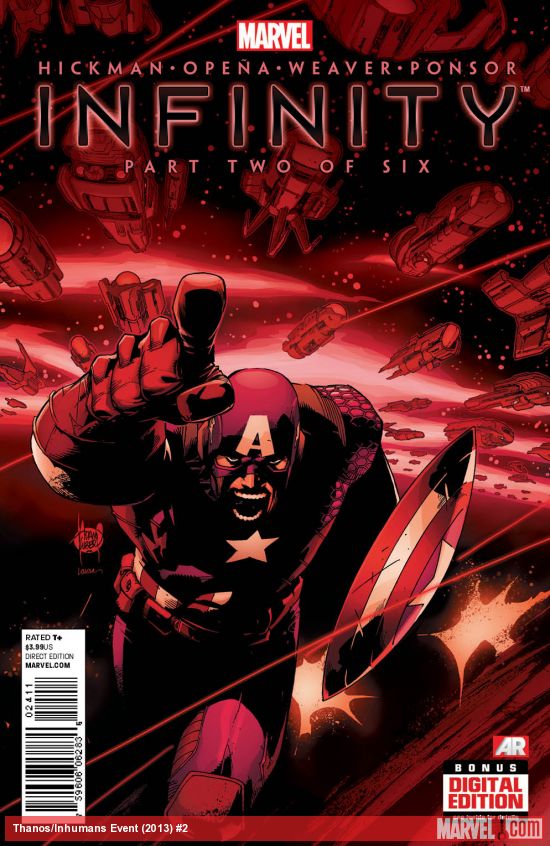 I have been waiting for Infinity #2, mostly so I could figure out who the villain is. The good news is that I now know. Both Thanos and the Builders are the big bad! Yet separated by millions and millions of miles I wonder how this story is going to come together.

The action takes place in two realms. On Earth, Thanos attacks and visits the Inhumans. He requests a tribute from Black Bolt. Thanos’ general Corvus Glaive of the Cull Obsidian (or The Black Order) requests that Black Bolt present to Thanos the heads of all Inhumans between ages 16 and 22. But as Black Bolt later tells the Illuminati, this is a cover for something else that Thanos’ really wants instead. In Deep Space, the efforts of the Galactic Council supported by the Avengers are not going well. The Avengers have to flee to Gladiator of the Shi’ar’s flagship. And they witness the Builders undertake an act that shocks even their former ally Ex Nihilo.

Despite a story recap, I started this story a little bit lost. Since I left Infinity #1, both Thanos and the Builders stories have significantly advanced. I was hoping that the Infinity issues would be readable for someone who does not read the tie-ins with The Avengers and The New Avengers. These are both titles I read as collected trades and I do not want to change this habit. I could see abandoning Infinity until they issued the gigantic massive trade ,which will have everything including Infinity: The Hunt and other titles I really do not plan to pick up on a monthly schedule. I wonder if this strategy actually adds or loses subscribers for specific titles.

Part of my problem is Infinity may be that it is too big. There are two good storylines here. I would have bought the Thanos story as a separate series, like I did Thanos Rising. But having the two stories thrown together is not working for me yet. I am sure comic book physics will eventually bring it all together. But at the moment this is two stories with two villains and two hero sets. I want to buy in, but really it may just be too big.

My interest in Infinity is waning. As someone who is not looking to read Avengers or New Avengers on a monthly basis, I realize I am missing a big part of the story. I admit that I am interested in Thanos’ secret especially after reading Thanos Rising, but I could see myself after issue three dropping this mini-series and waiting to borrow the collected trade instead. I am going to move forward into one more issue.