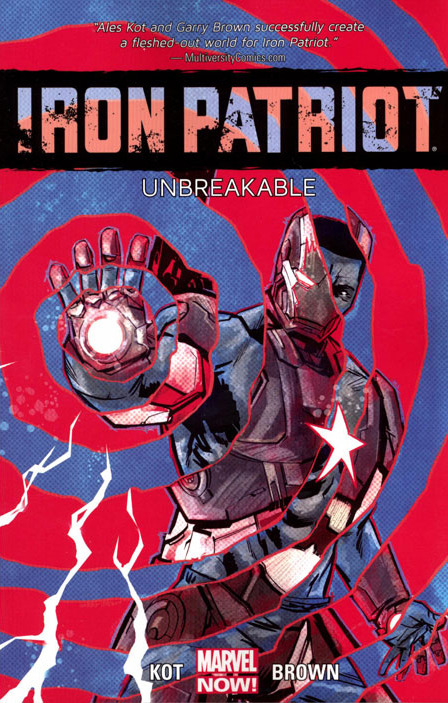 Sure Rhodey cannot get his own suit in Iron Man 3, but at least Marvel is giving him his own book!  Iron Patriot: Unbreakable helmed by Ales Kot, who had written James Rhodes as part of the Secret Avengers, puts Iron Patriot through the physical and emotional ringer.  And one has to ask is this armored hero really as unbreakable as the title hints.

James Rhodes is making a change.  He has left the Secret Avengers and has decided that he will only use his influence on domestic not international threats, not counting the occasional rescue mission.  Rhodes also hopes to spend more time with his father Terrance and niece Lila.  However, not everyone is pleased with his life choices.  And a conspiracy against the American government and S.H.I.E.L.D. pulls in the entire Rhodes family and holds their lives and that of an ex- President’s in its grasp. Can the family escape this new threat?

Level Seven Analysis
I really like James Rhodes.  And I think that Ales Kot treats him well.  Kot has a proven track record of writing the funny/quirky/irreverent/weird story.   So I entered the book with concern that Kot would take Iron Patriot to a weird place.  Now, there is fighty fighty with a monster you could classify as unusual.  But overall Kot lets Rhodey be Rhodey.  So the reader is very comfortable with how the character is treated and does not have to worry, it seems, that Iron Patriot will be disrespected or written with an improper voice.  Don Cheadle could very easily depict this version of the hero.

It is great to see Harley make the jump from Iron Man 3 to the Marvel 616.  Oh wait, I did not mention Harley?  Well let me describe Lila to you.  Lila is wicked smart, mechanical in nature and really likes spending time in the garage.  She also, as a waitress and some police officers learn somewhat snarky. Harley and Lila share the ablity to be stinkers. When we really get our first good take on her she is tinkering with an Iron Patriot drone!  She also knows social media and how to use it. Lila and Tony truly have a moment, because they are connected!

The situation report really makes the story sound simple.  But it in many ways is a political thriller that includes S.H.I.E.L.D., global peacekeeping and politics.  In an age of American troops deployed in peacekeeping situations, it could have the pulled from the headlines feel. The goal of the big bad is to start a new Civil War so his version of a better America can be established.  For this war to occur the big bad really intends for the symbol of the Iron Patriot to be a symbol in a very key fashion. Wait, a big bad wants to use Iron Patriot armor to make a public statement…well that sounds familiar.

This really is a family book.  And the inclusion of Lila and Terrance gives a lot of tension.  Lila’s mother is deceased and James really is a figure that should be more active in her life.  But does a superhero of his stature have time for a kid?  And then there is the tension of an adult child trying to live up to the ideals of a parent!  Throughout the story the family dynamic plays a prominent role that adds an extra layer of stress to the reader, in a good way.

Ales Kot has been writing more and more for Marvel lately with him currently having three key titles.  Secret Avengers is a must read for me with Cheese in the cast.  And Bucky Barnes: The Winter Soldier seriously has my attention with it spinning out of Original Sin and the presence of a character named Daisy.  So Iron Patriot for me comes in third.  It is a family focused book and less quirky than some of Kot’s other work.  I did enjoy Iron Patriot.  But when competing for my family budget I will read but as a borrow not a buy.