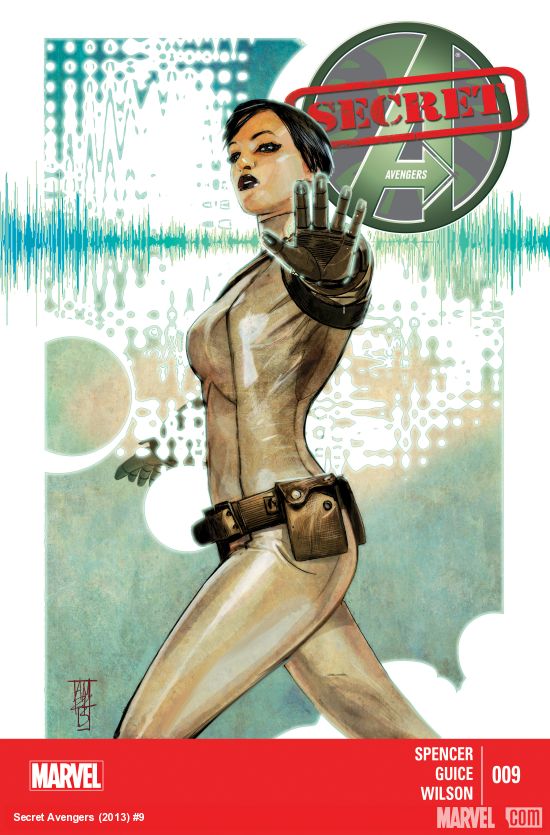 If there was ever a comic poised for a letdown for me, it is Secret Avengers #9. I love with a big old capital L the Mockingbird centered Secret Avengers #8. So it would take a lot for Nick Spencer and team to keep me from being disappointed with this Daisy Johnson focused issue. In the end was I underwhelmed or still flying high with this S.H.I.E.L.D. focused series?

We start in the past with Johnson and Hill as they discuss the need for the “Avengers Initiative” in a day of lowered budgets and growing threats. Daisy has concerns about Hill’s idea and puts requirements into place including consent, through the Secret Avengers will never remember why they signed on. Additionally, as a safeguard Daisy installs the mind wipe technology into agents beyond the field team. We then jump forward to today where the fugitive Daisy consults with her mentor Nick Fury about her situation and how to combat Hill. With the help of Manifold, Daisy commences her plan by protecting the few assets she has before Hill can take them. She partially fails but has enough remaining resources to contact a hero on the last page with who she may be attempting to form an alliance.

Let us go straight to the punch. I was not letdown. Secret Avengers has worked itself into becoming one of my favorite comic titles. And I am finding my appreciation grow in stories that are absent Nick Fury Jr. and Coulson. And yet again, Spencer writes a strong female driven story , this time with both the protagonist and antagonist as strong capable women that you have to respect. I never minded that this story was Coulson free! So while with earlier issues I was expressing concern that “my Coulson” was not hitting the pages of the title, now I feel like the story is clicking along at full steam without him. Now recently a co-writer has been named in Ales Kot. I am hoping that this will only add to richness of the story and help support Spencer’s foundation, unlike fans of Aquaman who are freaking out because Geoff Johns is leaving. Spencer’s work here has led me to look again at Morning Glories now there are more collected editions available.

Nick Fury, it has been forever, and you look good Nick. We have not seen Fury senior for over a year with the ending of Battle Scars as he passed off his name and duties to his son. It is clear that Fury is still a schemer and still understands how this spy world works. And he is very concerned with continuing to mentor his super young protégé. Though he has been off camera, his skills have not diminished. I would love to see a Fury/Fury team-up in this title. I am interested to see how the two men interact, even if it is in the pages of Wolverine over a poker game.

Again I am not an art guy. But Butch Guice’s illustrations seem a perfect fit in this story. His images give a feeling of a classic spy movie. The images and Fury’s presence only reinforce this issue as a classic spy tale. It was a great match to the script and I really enjoyed the rain and darker settings.

Secret Avengers #9 is another hit for me. I look forward to seeing how next month plays out as Daisy shares a secret with a Marvel hero who has yet to be seen in this title. But I will say he should be a perfect addition in a story full of spies and intrigue.