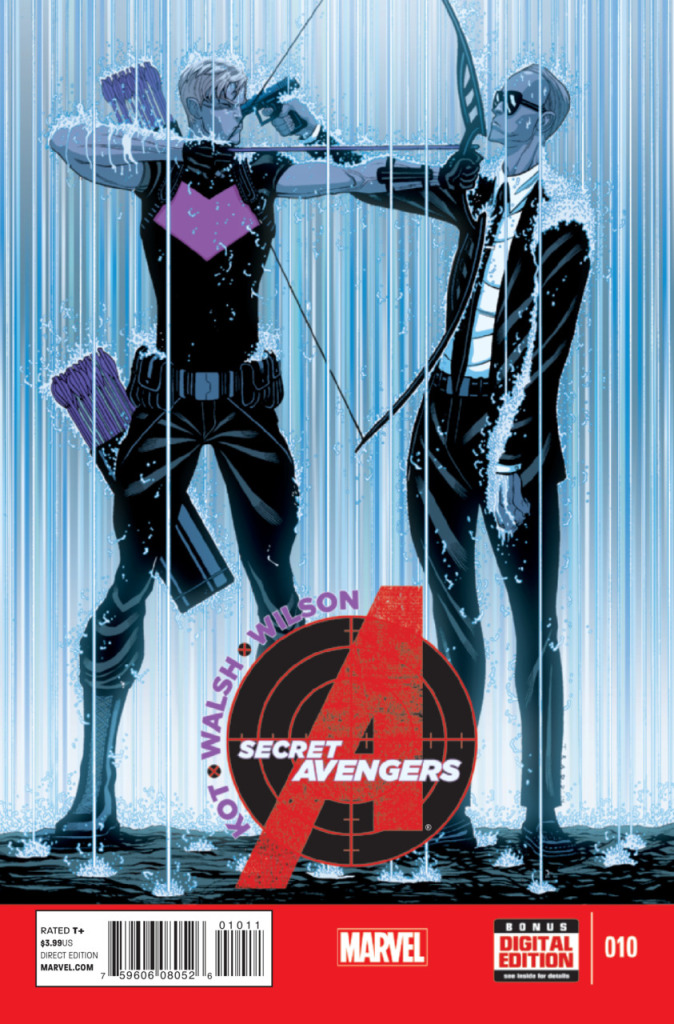 Thanksgiving really threw me for a loop. Because of being off work on new comic book day I had to wait a week to get my copy of Secret Avengers #10. Typically that may not have been a problem but with a cover showing Hawkeye and Coulson in a standoff…well it was torture.

Our agents take the “Road to Nowhere”.   Portals are opening around the globe and the psychic illusion of the Kowloon prison fades. In South America, Hawkeye chases Coulson. Spider-Woman and Vladimir attempt to learn the language of the Fury, who may not actually be speaking. And Agent Hill is interrogating Snapper about M.O.D.O.K.’s plans. All of this comes to a head as something vital has been missed in the big villain’s elaborate plans. And we are reminded yet again, the Great Culling is coming.

Oh man…I know what kind of underwear Marvel 616 Coulson wears. Should I spoil it? Should I? If you don’t want to know look away…

I really do love the Michael Walsh drawn South American chase montage. It is silent yet it conveys action and distance. You really get the sense of how hard Hawkeye is working to find good old AC. It is simply nicely framed and communicates volumes.

Ales Kot has been working on a story for ten issues now, maybe more when you count M.O.D.O.K.’s appearance in the last volume of Secret Avengers. This issue makes it clear again that we have been playing a long game because Agent Fury Jr.’s coma plays into the story. Our big bad has been planning for this day for quite some time and there was purpose behind his accident

Snapper, man I love him. But in this issue he has moved from being a Beaker analog to well something somewhat sinister. After issues of him being so corny his darker personality in this issue really has an impact!

Issue #11 promises us “The Beginning of the End.” Wait was that a title for an episode of Agents of S.H.I.E.L.D.? Okay, in the end I do not care because I am getting antsy about how and if Ales Kot will conclude Coulson’s story in Secret Avengers so he can catch a boat, I mean his own book!