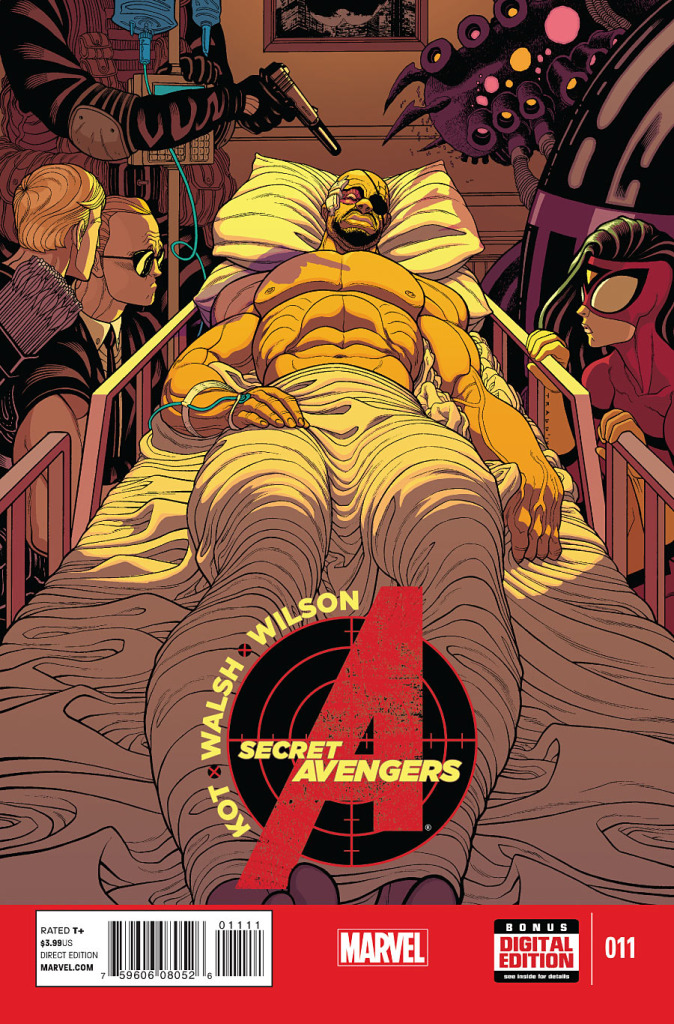 With Agent Coulson in his own comic I wondered what if any changes would be seen in Secret Avengers.  Would Ales Kot and Michael Walsh be able to continue using good old AC every issue?  And would we see Kot’s long story resolve as Coulson’s new monthly home was elsewhere and rumors of the comic’s future abound?  As I began to consider these questions I opened Secret Avengers #11 “And What Do You Believe?” followed by the phrase 1 of 5!

Snapper has taken the hellicarrier and holds Maria Hill hostage!  Meanwhile Hawkeye and Coulson continue their confrontation with guns/bows drawn!  And an unlikely participant, M.O.D.O.K., attempts to lessen the tension!  As we return to the hellicarrier, Snapper reveals his mission statement!  He will punish the world’s bullies as he helps Tlön emerge!  And he plans to start now by killing the incapacitated Nick Fury Jr.! As the issue ends Tlön progresses and we begin to question the Great Culling that is coming!

Yeah, I saw what I did there!

Just me open this analysis with something I have never done before.  I would like to applaud colorist Matthew Wilson!  I have in past comic files questioned some of the covers that Wilson has contributed to.  But his use of color is likely one of the most striking contributions to this issue.  And it is seen best in the scenes between Coulson and Hawkeye.  Coulson is melancholy as he considers his life, the lies of Maria Hill and the PTSD that his colleagues are diagnosing him with.  And as a reader you feel the stress in Coulson’s voice.  You hear the sadness in his tone.  You feel completely undone as Coulson argues with Hawkeye.  And I believe it comes down to the brilliant use of color.  I have never ever considered color as someone who is more of a story guy.  I have always assumed colors. The words are few.  The images are simple. Yet the pages speak volumes of emotion as drawn by Michael Walsh.  As I visually studied these fantastic images of Coulson and Hawkeye in a standoff, I think that Matthew Wilson’s choices of colors tie everything together to give an emotional experience to the reader.

So I will avoid spoilers.  But I am beginning to question if I am the only one concerned with a consistent Coulson in the Marvel 616.  This Coulson, the Cheese version, is former Special Forces.  While the other Coulson has been studying superheroes his entire life.  And speaking of superheroes, Cheese seems unsure about working with costumed heroes while the other Coulson loves his job.  Superheroes are that guy’s passion.  And this is not even considering his appearances in Deadpool which somewhat comes off as a combination of Cheese and S.H.I.E.L.D. Coulson.  And how long will these two different Coulsons be around.  I assume that Coulson will be in all five parts of this arc; five parts shocked me.  So the other Coulson will be developing independently of Cheese.  And I assume that Mark Waid has been given permission to stray from Cheese.  Should I not even worry about this and let both writers tell their stories.  Yes Agent Daniel that is probably best!

I really enjoyed Vladimir in this issue.  The character is a sentient bomb.  But he shows a compassion and concern for his team members.  He is very concerned about two figures he has not really interacted with.  He makes it his mission to save Nick Fury Jr..  But he needs help to save the agent so he turns to the captured Fury (no not Nick Fury but the Fury monster).  And how does he attempt to bring the Fury onto the side of the white hats…by making an emotion appeal.  So basically we have an unemotional bomb communicating to an emotionless killing machine about compassion and family bonds!  Yeah, that happened.

Oh Snapper, you used to be really fun.  You were Beaker.  Now you are a monster and your heel turn is really scary.  No seriously, Snapper scares me a bit. Agent Hill may seriously have more than she can handle with the bully-hating sidekick.  I do wonder though, is M.O.D.O.K. a bully?

What is going on here?  Agent Coulson is on the page, but not the same Coulson as we see in S.H.I.E.L.D..  We have been working on the same basic story for 11 issues now.  And now Kot has us questioning what is coming and what has been building!  Yeah, I love the twists and turns and feel like this creative team has gelled to the point where month after month the M.O.D.O.K.y goodness is a must read.