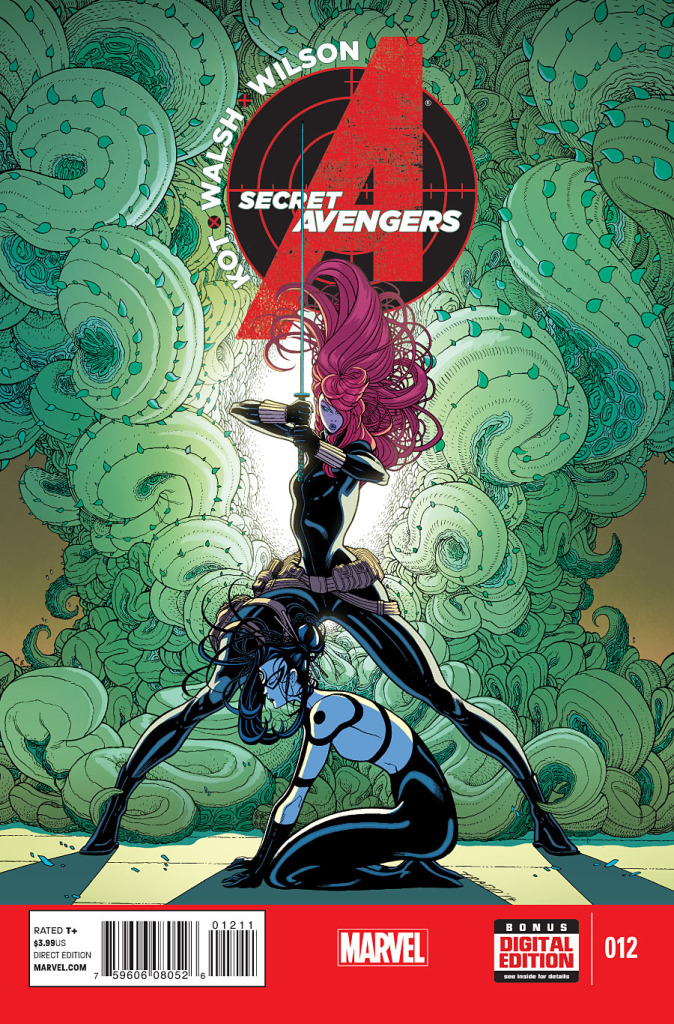 I have been waiting for this moment, Agent Fury Jr. wakes up! We are twelve issues into what can only be called an epic. Schemes are revealed. Plans are made and we may be just 3 issues away from the conclusion to Ales Kot’s work on Secret Avengers with “And What Do You Believe?” part 2.

In a rainforest, M.O.D.O.K. confesses to the boys. He tells Hawkeye and Coulson that he was the villain and he is in love! He hopes his confession and description of how he defeated himself can get the Secret Avengers to join him in freeing Agent Hill, his ladylove. Meanwhile in Tlön, Black Widow and Lady Bullseye join forces against monsters. Agent Fury wakes up and finds surprising allies arranged around him. Snapper brings his victims to the Nursery where belief becomes reality and he can finally act out against bullies. Finally, a Secret Avengers team, very male heavy, reunites to plan a daring rescue while others fight for control of S.H.I.E.L.D..

S.H.I.E.L.D. is in chaos. Agent Hill has been taken. And it seems outside forces are more interested in replacing her as a result of her being taken from her own hellicarrier. The only one really willing or able to save Hill is M.O.D.O.K.! The whole evil scheme to kill all the Secret Avengers was his to start with. Now the super villain must best his own protégé and save the girl.

M.O.D.O.K. continues to shine in this storyline. He is a villain on the path to redemption due to one of the most powerful forces of all time, love. Of course we do have to wonder if he will return to his dark path if his love is not returned. One of my favorite moments of this issue is M.O.D.O.K. going meta and calling out comic book/spy movies clichés. We would be lost unless we were in a comic, which of course the reader knows he is.

One of the things I do not like is need for the ladies to be saved by the men. This title is so strong in representing strong female heroes. So it really feels weird to have Black Widow, Hill and Spider-Woman all in peril with the men making the plan to save them. I really hope we get a flip in this scenario with Hill saving M.O.D.O.K. but as things stand it is not really the plan I was expecting

I do feel like Kot is rushing. He points out in some of his boxes key links instead of letting the clues build. It feels like he needs to tell us things now because in a few months he will not have the pages to keep telling his story. I do worry the last volume of Secret Avengers felt rushed as it concluded. And I really do not want to go through that again.

I am super excited about issue 13. And it is all about the cover image of our little team going off to save the damsels. M.O.D.O.K. is going after the bully of bullies and his eyes on are the prize…love!