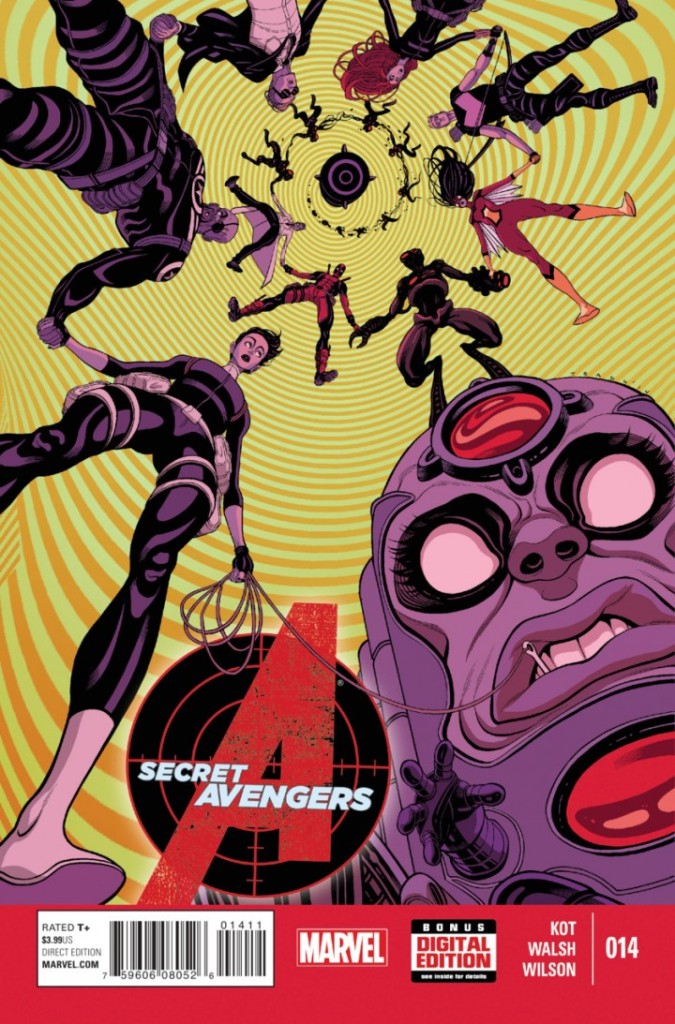 Marvel has been warning us for awhile now that “Time Runs Out!”  And apparently time has run out for Ales Kot and Michael Walsh as Secret Avengers volume 3 has officially been cancelled and scheduled to end before Secret Wars.

Snapper is bringing Tlön to Earth.  And he is using the Secret Avengers, especially M.O.D.O.K. and Hill, to bring monsters to our world to punish all bullies.  Tlön is the world that you can imagine, and Snapper’s imagination is fairly grim.  Meanwhile the remainder of the Secret Avengers follow M.O.D.O.K.’s plan to imagine the best possible world and hopefully defeat Snapper’s horrible plan.

Level Seven Analysis
Do you like monster love?  If you do, you will love this book!  Seriously, we meet the father of the Fury’s babies, and it is true monster love.

M.O.D.O.K., do we trust him?  We really need to, because it is his plan that we are all following to bring down Snapper.  Now he does seem to have made himself vulnerable in order to save his girl.  So that is a point in his favor that we can trust him.  But as our S.H.I.E.L.D. agents question trusting the reformed super villain, we all want to yell don’t do it at them.

I really do not have a lot to say.  This issue pushes a year plus story to conclusion.  Not all of the story elements are crossed yet, Black Widow fails to appear.  But I do feel like next issue Director Hill will let us know if she will reciprocate M.O.D.O.K.’s feelings of love!  And we can discover if a sacrifice made in this issue will have a suitable payoff.

Tlön is coming.  And if we do not stop it, it will swallow our world.  “…And What Do You Believe?” part 4 sets us up with the idea that the only way we will survive is to imagine a better world.  Wow, maybe we should be doing that in our universe!