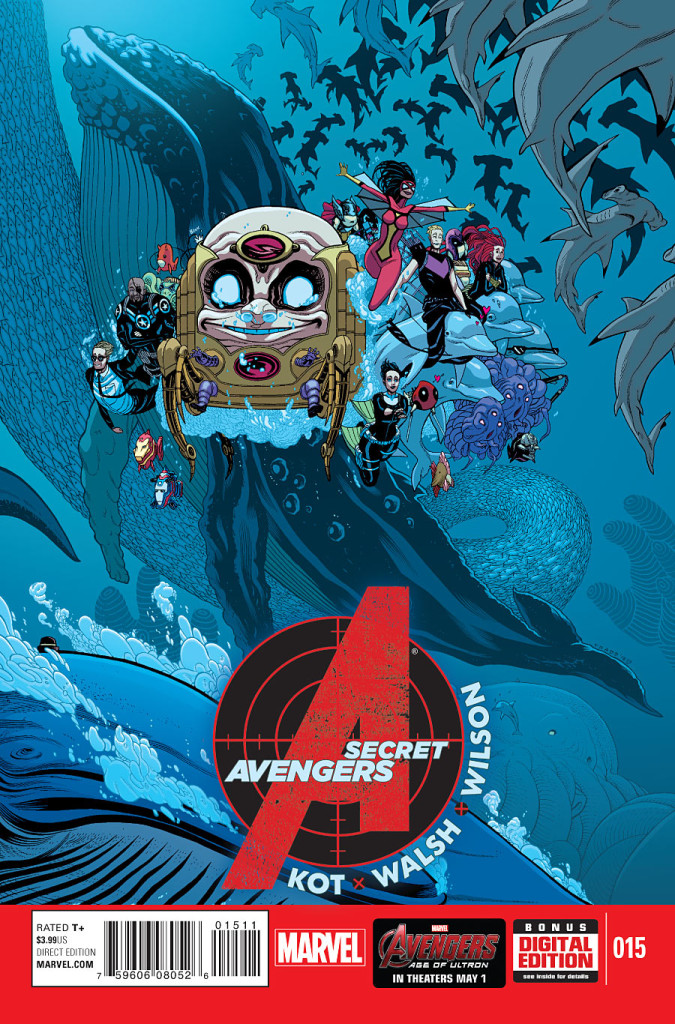 Well, Secret Wars, or perhaps sales figures, has led to an end of an era here at WelcomeToLevelSeven.Com.  Secret Avengers Volume 2 #1 was the very first comic file we posted.  The reason we have comic files is really because of that issue and the fact we realized we could track Agent Coulson in print along with on the screen.

Secret Avengers #15 “And What Do You Believe?” 5 of 5 is the end of Ales Kot’s, Michael Walsh’s and crew’s run on this title, and the end of the title!

Can the Comic Files survive?

M.O.D.O.K. has a plan to save the world from Tlön and the Secret Avengers are not thrilled!  He wants to drop Vladimir the sentient bomb on top of them while everyone imagines that best possible world!  Oh yeah right, drop a bomb on us!  Will this save the world?  Will someone listen to Deadpool and realize that his crazy talk about living in a fictional world is real?  Will there be a scene with naked Secret Avengers sitting around a fire with Snapper?  Does someone get a helper monkey, and I’m not talking Fitz?  And most of all, will Maria Hill search her heart and free herself from the void and evil of the world?

Level Seven Analysis
Everyone loves happy endings.  Even Batman would like a happy ending!  And this is what I wondered as Ales Kot put Cheese Coulson to rest and MCU Coulson flourished into his own title.  Would he give the Secret Avengers their best possible world, or at least keep everyone alive.  I would say that Kot does bring everyone to an ending that can be used as a next step to a mysterious next chapter.  But unlike the ending of Secret Avengers volume two which ended

with a group of our heroes in a café looking to the future, there is not specific hints of next steps.  So I do like the fact that the story ends with minimal foreshadowing.  This is especially true since Secret Wars might reconcile our Coulsons.

Really the best thing out of this volume and this Kot run is the M.O.D.O.K. and Maria Hill relationship.  And there are a number of pages that help the two reflect on their feelings for each other and most importantly themselves.  Kot really goes deep into Hill’s motivation and perhaps helps her refine it.  Of course, Secret Wars, could easily toss it away and never use it.  Which would be somewhat sad, but not as sad as Mockingbird, Bucky and Daisy Johnson not forming a team that I am now calling West Coast Secret Avengers.

I am sad to see Secret Avengers go.  I will continue to argue that Kot never got Coulson.  I think Kot wrote the Coulson that he wanted for his story and themes.  And that Coulson worked in his creation, it just was not my Coulson.  I do not believe he wrote a Clark Gregg modeled Coulson like seen in Deadpool and now S.H.I.E.L.D..  But Nick Spencer never seemed to get him either.   The fact that Coulson can be hard to get is just another testament to Gregg.  The best thing that Kot brought to this title was his portrayal of M.O.D.O.K. which for me is now the perfect M.O.D.O.K..  Additionally, I appreciate the very long game that he played and I do think he got his payoff for what he started in issue #1.

I really think Michael Walsh loved drawing Deadpool!   And I loved seeing it!

Goodbye Secret Avengers!  I am sad to see you go.  I would have liked you to stay, with Coulson in his own book.  But you left me with some big memories (Coulson/Hawkeye standoff and of course Deadpool’s giant cake).  So just know that despite it taking time for me to warm up to you, in the end you were a smart book with a great story that will be missed by least me.