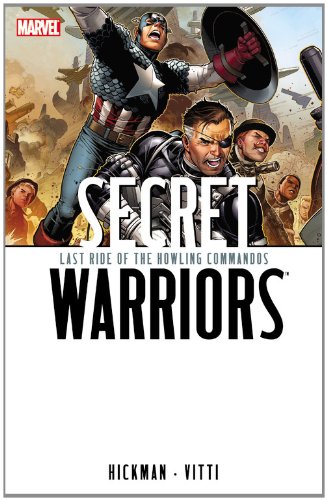 The story opens in Asgard as H.A.M.M.E.R. attacks Asgard. During the Battle Ares turns against Norman Osborne and dies. With anger in his heart, Phobos leaves a message for the American president whom he blames for his father’s death. Later, the United Nations Security Council interviews Dugan and Sitwell and gets a story that jumps between a Howling Commandos reunion and a Howling Commandos Private Military Company (HC PMC) attack on an a Hydra base that did not go as planned. The story ends with the question of who will do what must be done and tragedy for the Howling Commandos. And if Marvel history has taught us anything there is one man willing to make the hard choices.

This volume is somewhat confusing. It does not begin where the last one ends and it really does not follow-up on loose ends. One of the major cliffhangers in Secret Warriors: Wake the Beast was around Daisy Johnson. Daisy is barely seen in this volume, and Phobos is the only member of her team to make an appearance. The most frustrating is the Hydra/Leviathan war. Yes there is an attack against a Hydra base. And the tensions between the two villainous groups are mentioned. But the next step in their conflict is largely ignored.

The best aspect of Hickman’s writing is the roll call of the Howling Commandos. Fury invites Captain America to join with the surviving Howling Commandos to reminisce on fallen brothers. This is very appropriate as we discover that Cap was with the Howlers at D-Day. While there is plenty of pain in the survivor’s voices, it is made more bitter by the high cost that HC PMC takes as they fight Hydra.

This Alexander Pierce is brutal! The Hoff does not know this guy!

What Nick Fury secret bases does Phobos launch his attack against the U.S. government from, Providence of course. Tuesday night fans have to love that piece of trivia.

Jonathan Hickman’s Secret Avengers: Last Ride of the Howling Commandos scores well in the nostalgia department as it dwells heavily on the history of the Howling Commandos. But it does not work as well in advancing the macro story. As the world looks to deal with the Hydra/Leviathan threat in the future it does appear that the next volume will put us back on track. Can the world count on Nick Fury?