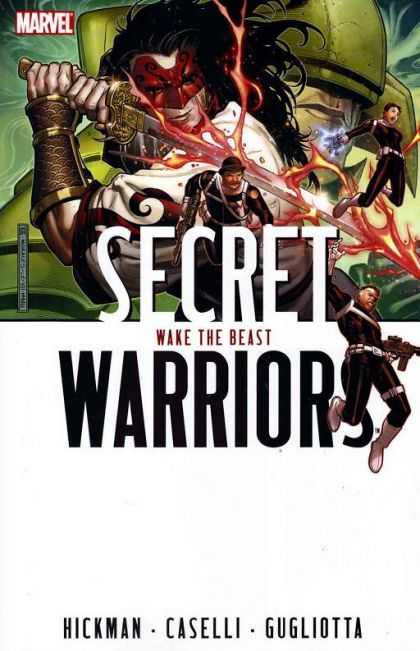 Secret Warriors: Wake the Beast chronicles the open phases of a war!  Two super villain organizations prepare their forces for the ultimate evil conflict.  And since Nick Fury has been a traditional enemy of each and sees himself as a guardian of peace, he cannot sit on the sidelines.  To meet the challenge, the Secret Warriors will have to grow up fast to meet today’s threats head on.

Hydra and Leviathan prepare themselves to battle each other.  And their respective sides are full of intrigue and betrayal as members of their leadership jump sides and work to further each group’s cause.  But Nick Fury interjects himself into this conflict.  He has tasked three teams; Team Black under Agent Pierce watching over Hydra, Team Gray under his son Mikel monitoring Leviathan and Team White under Daisy Johnson preparing to serve as Fury’s hammer if this conflict gets out of control.  As Fury prepares Daisy to serve his purposes, he teaches her a tough lesson on leadership and readers are left wondering if she will fail Fury’s exam.

The background of Agent NAME RETRACTED is explored in depth and NAME RETRACTED’s entire history with Fury and S.H.I.E.L.D. has to be questioned with the shocking revelations that jump off the page.

I have a friend who raves about the storytelling of Jonathan Hickman.  I do not think we really see fully eye-to-eye on Hickman’s writing (my local comic shop guy agrees with my chum).  My buddy references the new stuff, which I think is okay.  But I really cannot thing of a story arc that got me really excited.  Secret Warriors: Wake the Beast has began to revise my opinion of Hickman.  But I think the aspect that I have liked the most in this story is not the plot but the use of characters.  This book could be overloaded as he uses the new Secret Warriors and the classic S.H.I.E.L.D. agent roster.  It never seems like the page is overloaded.  The classic agents all are used within their accepted personalities (is it me or do characters take a life of their own) and they use their history to help Daisy become an emerging leader.

Speaking of using classic characters within their accepted profiles, who is this Agent Alexander Pierce.  He is not Robert Redford, but he has also come a long way from Nick Fury vs. S.H.I.E.L.D..  This Pierce is ruggedly handsome.  He has flowing hair and muscles.  And he is super competent.  I just worried that The Hoff would never recognize this heroic Pierce.

One of the aspects that I have enjoyed about this book is watching Daisy Johnson grow.  She proves to be loyal, but loyalty to Fury and her team are not always the same thing.  And Fury wants to make her stronger by helping her learn to make the thought choices.  She will make those choices in Secret Avengers and have to teach Nick Fury Jr. the leadership and craft lessons his father taught her.  This Daisy is younger and more naïve than the Secret Avengers Daisy, so though I know she will make it out of this title I am worried that learning from Fury is not painless.

Secret Warriors: Wake the Beast is a good spy story.  And the idea of a villain conflict has my attention.  I look forward to the next volume as about three different cliffhangers were dropped in this volume.  I am excited about this S.H.I.E.L.D. title without S.H.I.E.L.D. and want more so I can better understand where these characters are today.