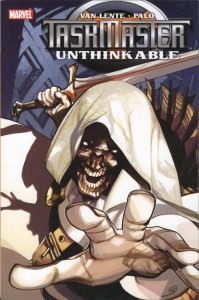 Taskmaster, I need more of you. You are Deadpool’s buddy. You are now a member of the Secret Avengers. And your power is really cool. Would Taskmaster: Unthinkable written by Fred Van Lente and illustrated by Jefte Palo finally quell my desire to have more Taskmaster? Or will I continue to demand more of him on the small screen?

Taskmaster has issues. A billion dollar bounty has been placed on his head by The Org, a shadowy criminal organization, for claiming he was a Captain America informant. And he really does not know why. While Taskmaster has photographic reflexes, the incorporation of new fighting moves and styles into his memory wipes his own memories from his mind. While on the run, Taskmaster dodges assassins from groups like A.I.M., Hydra, and every corny villain group you can think of. Ironically many of the assassins looking to end Taskmaster’s life are his former students. The villain is joined by a waitress who he has decided is a good person, and Taskmaster does wish to do good despite feeling (but not knowing) he has done bad things. Taskmaster visits the Don of the Dead in Mexico and an Andes Neo-Nazi village filled with South American Nazis. By the time the story ends, Taskmaster’s origins are revealed including his interesting relationship with S.H.I.E.L.D..

As I have said several times, I really want Taskmaster to show up on Marvel’s Agents of S.H.I.E.L.D.. I think a lot of the reason I want to see this happen is because Taskmaster is wonderfully grey. He is a bad guy, who can also fill the role of the white hat, or hood, when needed. And Taskmaster: Unthinkable reinforces this impression. Taskmaster wants to do good throughout this story. And this is why he saves a waitress and protects her while he is on the run. And as the story plays out it becomes even more clear that he is incredibly grey. These moments include the fact that his former students respect him incredibly. And his origin story also reinforces the fact he can be a hero.

The plot device of Taskmaster losing his memory is highly effective. Since Taskmaster’s powers are based on memory, it makes sense that the trade off is he must lose a memory. Wait, did we see that as a plot device on Married with Children? It is easy to feel for Taskmaster as a reader since he is losing portions of himself. The fact that he is lost and is missing his identity is a problem that us unpowered readers can partially understand and fear.

This story is really fun. And the villains really bring the silliness. The Don of the Dead, and his secret origins will make you chuckle. The Andes village, where you watch the natives attempt to live Nazi ideology out in their daily life is both silly and makes you think. But the pinnacle is Redshirt the Uber Henchmen. Taskmaster goes all Deadpool on Redshirt, with puns and pop culture references. And the name is just plain silly!

Honestly, Taskmaster: Unthinkable makes me want more Taskmaster. His origin is perfect for the show, and he could inject some humor on Tuesday nights. I have often argued that one of the biggest mistakes on Heroes was not building enough of Monica Dawson up on the screen with her Taskmaster like power. I just think it is time for ABC to correct NBC’s mistakes.