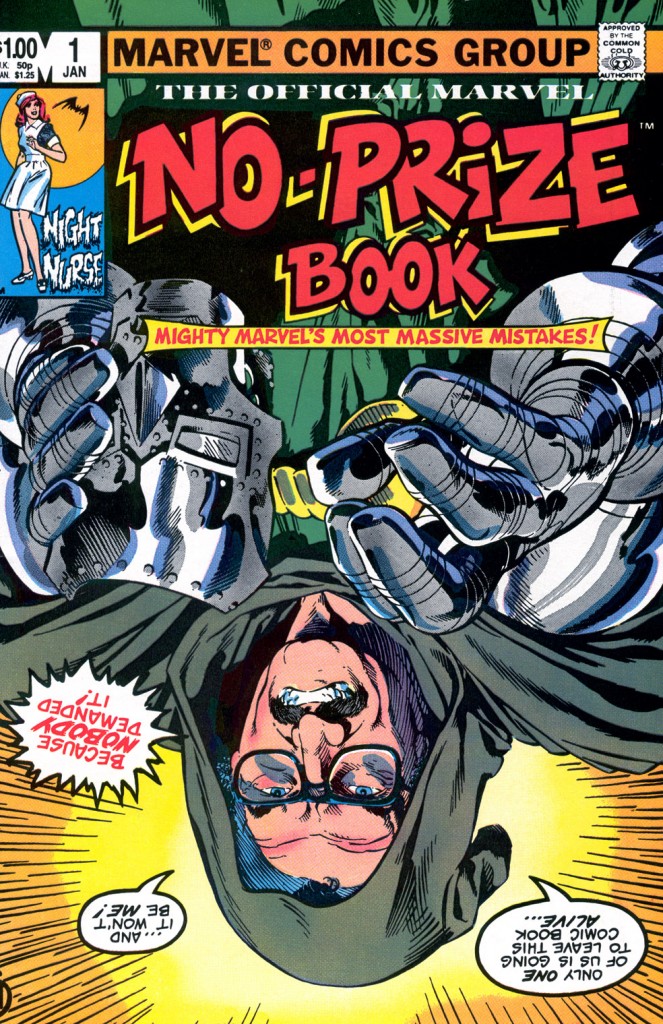 When you print as many titles as Marvel Comics does and for as many years as they have, well there are going to be mistakes. And it is a reader pointing out a mistake to Marvel editor and writer Stan Lee that led him to send the first no-prize. That first no-prize was a simple envelope indicating inside was no-prize. Yes, if you were a careful steward of Marvel’s continuity you got nothing! After this event it became tradition for Lee and his predecessors to send no-prizes to those who uncovered Marvel’s goofs.

The Official Marvel No-Prize Book: Marvel’s Mightiest Most Massive Mistakes published in January 1982, chronicles the history of the Marvel No-Prize and displays several No-Prize winners. The book shows the original art work and text with mistakes, like Peter Parker being referred to as Peter Palmer. Or the reader is shown frames from different issues that demonstrate where Marvel authors lost track of the story. Also they display scientific impossibilities like, if Ant-Man is the size of an ant and Wasp is the size of a Wasp, why are they the same size? Commentary is added to the pages in Stan Lee’s voice to point out the Marvel mistake on display.

These goofs are pretty humorous. Yes the do not add a lot to the story of S.H.I.E.L.D., especially size our favorite security organization is never mentioned. But they do give us insight into the history of Marvel comics and Marvel contributor’s abilities to laugh at themselves, especially Stan Lee. Some of these goofs I probably would have never thought about, though readers did catch them. Really how does Iceman make Ice Cream with just his ice and actually have it taste like anything but snow? It is really funny to see a character look through a periscope through his eye patch. I guess not everyone has learned to turn like Nick Fury!

You really do have to applaud Stan Lee and his good attitude about these goofs. Many of these mistakes are his. It is understandable that he may have forgotten some of the smaller details since in his prime he was writing about a book a day for Marvel. If anything his ability to poke a little fun at himself makes Lee the uncle or grandpa or everyone wishes they had. Mistakes do happen. Yes, one may find it strange that he calls Peter Parker by the wrong name, but then who has not called their kids by a pet’s name. And when I recently read an image of Superior Spider-Man where Peter Parker calls himself Peter Palmer, I was able to appreciate the shout out toe Marvel’s past.

The Official Marvel No-Prize Book: Marvel’s Mightiest Most Massive Mistakes is a fun graphical look at Marvel history. It is not always clear on what grounds Lee was issuing his original no-prizes for. But as a podcast that has been inspired by this idea, it is nice to know you can give away a non-existent prize for our goofs, fun ideas and service to the greater audience.

Marvel may not be actively be providing no-prizes today, but the idea lives on!