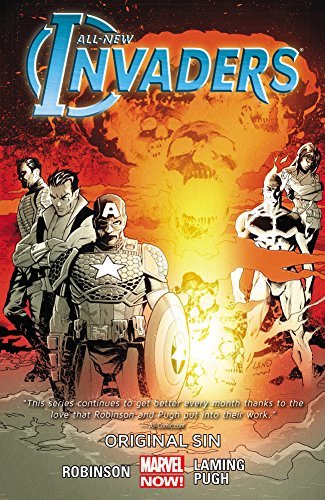 All-New Invaders: Original Sin reveals to us a horrible secret linked to one of the most prominent events of World War II.  And we are challenged to answer could the Invaders have stopped it from happening in their fictional world?  But most of all I ask is this another issue with a disposal secret or one with a truth that really matters.

At Captain America’s suggestion, the Original Human Torch Jim Hammond joins S.H.I.E.L.D.. And on his first mission he is confronted by Japan’s hero Supreme Radiant Friend, or Radiance.  Radiance was in New York when the Truth Bomb exploded and a horrible secret about World War II was exposed.  Could the Invaders have stopped a key historical event of the war in the Pacific?  Did these heroes allow innocents to be killed?  The action jumps between today where Hammond fights Radiance and 1945 where the Invaders fight their sidekicks the Kid Commandos during the closing days of the war.  Afterwards, Hammond attempts to save his former partner Toro as he is personally impacted by global Terragenesis and becomes a target of A.I.M..  And wow, that is a lot of Deathloks!

Let me start off with saying I really like Jim Hammond as an agent of S.H.I.E.L.D..  His jumpsuit, which matches his traditional red costume but with an eagle on the arm, is really sweet.  And in a cynical spy world he brings a World War II era optimism and moral compass you have to respect.  I had read him about him already as an S.H.I.E.L.D. agent in the Fantastic Four and he brought the same morals to that book.  And really his addition is one of the few things that has been working for me over there.  So between the character and the design, I love Jim Hammond Agent of S.H.I.E.L.D..

Agent Coulson is freaking Jim Hammond out!  Now, we know Phil Coulson.  We love Phil Coulson, even when he is Cheese.  So as a reader we will give AC the benefit of the doubt.  But Hammond is convinced that Coulson does not like or trust him.  I do not want to spoil why Coulson cannot stop looking at the Original Human Torch, but you will be pleased.  And it fits the character of Coulson in both the comics and the Marvel Cinematic Universe.

Hey, is that Steve Rogers and Bucky Barnes in these 1945 flashbacks?  The answer is a big big no.  As someone who reads the Rogers Captain America most times, it does take a while to realize that the star spangled Avenger we are looking at is a post-accident replacement and not the Cap we know and love.  Writer James Robinson actually points out these are not our regular heroes, and I am glad he did so my mind cannon can remain secure.

The big question is what about the truth?  Does it have an impact?  Really, I do not feel like this truth impacts the Marvel 616 greatly.  But it feels like a truth that fits this title with its callbacks to World War II.  So despite the fact it really does change anything, I still feel like it is a good story choice.

Invaders as a title is something that I like but do not love.  It is generally a fun and action filled title…but maybe not overly complicated.  But then other that the fact that Jim Hammond is a flamed based superhero android out of time working for S.H.I.E.L.D., he really is not a complicated guy and is the star of this show.  And really a Jim Hammond led title is really nothing bad.