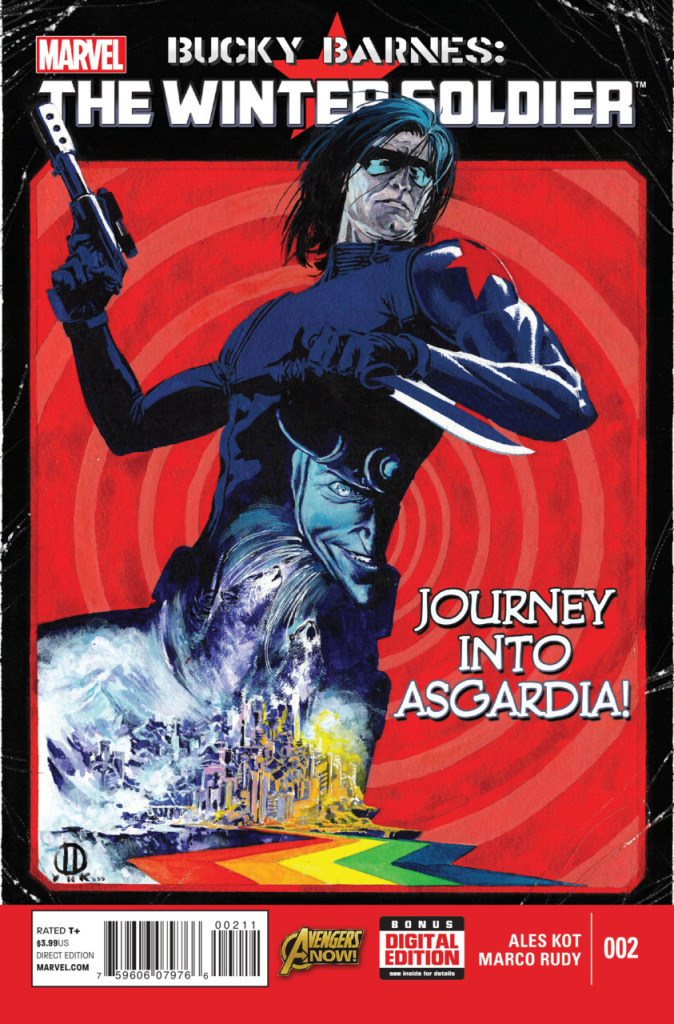 I have really been on the fence about following Bucky Barnes: The Winter Soldier by Ales Kot.  First, Kot is writing this and Secret Avengers at the same time and I was really impressed by issue #1.  I do like what he has been doing with M.O.D.O.K. in the agent filled title.  Additionally, I keep hearing great things about the title.  Second, Daisy “Skye” Johnson is the sidekick in the book!  So as long as she cannot appear in S.H.I.E.L.D. this is Skye’s book!  Third, I find Bucky Barnes to be a very interesting anti-hero.  Recently I found myself interested in the description of issue #3 so I picked up issue #2 “A Dream With a Dream” at the same time.

Situation Report
Bucky Barnes has been shot by a bullet filled with something Asgardian.  So the delirious Bucky invades Asgard to talk to the one god who can explain what is happening to him, old Loki!  Bucky is led by Loki through a series of visions that points Bucky to his next destination.  Meanwhile from their spaceship, Daisy supports Bucky and catches a glimpse of the future.

Level Seven Analysis
This issue is seriously trippy.  Marco Rudy must have had fun penciling this issue because his psychedelic art is really the focus of this book.  The images have an unreal quality to them that really make you think, “Bucky is not okay!”  Jim Steranko would be proud.  So really the plot element is short, while the visuals and the ethereal qualities of the story stand out strongly.

Daisy really questions her job.  She is working support for someone labeled as a villain that has a job that no one can know about…in space.  Yeah, but Daisy think about the benefits package!  Really this is a great role for Daisy since she is continuing the good work of her mentor Nick Fury.  And it is not like she can go back to S.H.I.E.L.D..  She is just as much as fugitive as Bucky.  So hey Daisy you have a spaceship, you are in space, enjoy yourself.

Okay so Loki is currently a young adult.  But there is an incarnation of old Loki in an Asgardian prison that only a few people know about.  And apparently Bucky knows!  Now let us throw in the fact that while Old Loki is in the cell, he is also running his schemes from a cave and this only Bucky knows about?  You confused yet?  Good because Bucky is not.  Just remember to keep your Lokis straight Agents.

After Bucky Barnes: The Winter Soldier #2 I am still on the fence.  Issue #3 is in the queue for a future Comic Files, but after that I am undecided.  The story is unique.  It is taking superheroes to some new places, in space.  And it has Daisy Johnson on the regular roster.  So I will hold out until after the next issue to give my rebuy verdict for future months.