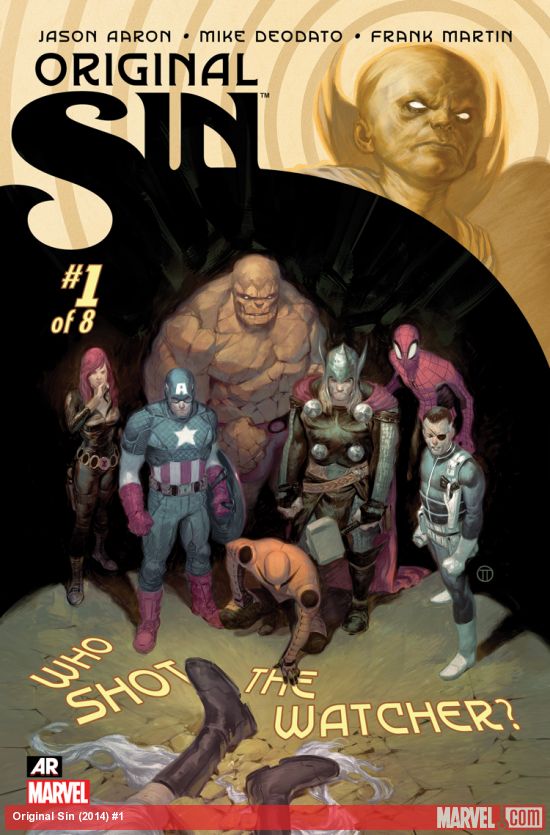 Another crossover event! Hey why don’t I still this one out until the trade, I’m sure there is nothing to see here! Wait, Nick Fury Sr, Nick Fury Sr. is in the house. I’m in! Where’s my copy of Original Sin #1 by Jason Aaron and art by Mike Deodato?

Uatu the Watcher watches from his lair on the moon when suddenly something happens which he cannot look away from. Meanwhile on Earth, Nick Fury enjoys a meal with Wolverine, Captain America and Black Widow sharing tales from World War II. Cap is informed of an incident on the moon, where it has been discovered that the Watcher has been killed. Captain America asks Fury to come out of retirement to lead the investigation. And though he is not a homicide detective, he takes the case. But to solve this crime he will need a team that can go where the Avengers cannot. Fury’s team must find the Unseen, the Original Sin. Fury’s squad of Black Panther, Ant-Man, Emma Frost, the Punisher, Doctor Strange, Moon Knight, Gamora and Winter Soldier track down their first clue to a Mindless One who has the Man on the Moon in his thoughts.

Nick Fury Sr. has been retired since April 2012 with the conclusion of Battle Scars #6. At that point Junior took his place and we can assume that Marvel’s premier secret agent took some time fishing, maybe going to the beach and occasionally mentoring Daisy Johnson. Otherwise it has been really quiet on the Fury Front. I really enjoyed his re-introduction into a big story. He sits quietly at a diner and shares stories of the Big One with another World War II veteran. He comes back amongst friends. And I appreciate that the greatest battlefront meal that both shared occurred at a real life battle instead of the many fictional ones they fought. It is a great tip of the cap (did you see what I did there) to the Greatest Generation.

Fury’s skills are back and it is like he has never been gone for two years. Though he is not a detective as he points out several times, his skills with assassination help him understand quickly what occurred on the moon. And he knows what he must do, which of course involves secrets and making the difficult choice. Nick Fury really does seem the best choice to lead this challenge. And the fact that he is in charge is clear the minute he insists he drives to the moon! Agent Ben would probably squeal at this moment!

Poor Uatu, you had to watch your own death. Last time I saw Uatu he was popping up randomly in issues of Wolverine, I wonder if anything ever happened with that? Seriously, I am still not sure he was doing there, but it meant something right?

What am I hopeful for? Well I know that Marvel plans some big reveals especially around some of the biggest moments in Marvel history. As a comic fan I am a little cynical and hope they are for the good and not just cash grabs. I really want good story, and so far they have my $4.99 (I really wish this was a dollar cheaper). One thing I am not expecting, Uatu to stay dead!

Marvel found the way to get us Agents back into a major crossover event, put Nick Fury at the head of the table! I am excited to see Fury back making the hard choices. And at the moment I feel good about the story development. So I may just be around long enough to find out in 7 months what the Original Sin was. I just hope they do not expect me to read a lot of tie-ins!’